Exeter set up all or nothing showdown with Munster 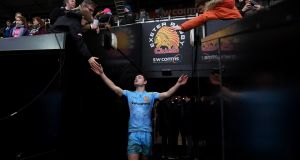 Exeter boss Rob Baxter is ready for “a fantastic test” when the Chiefs face a Champions Cup showdown against Munster next Saturday.

Baxter’s men kept alive their quarter-final hopes with a 34-12 bonus-point victory over Castres at Sandy Park, Exeter. Yet the English Premiership leaders still face a Herculean task to progress. Exeter must beat Munster in Limerick, although a losing bonus point would still edge Munster through as Pool Two winners unless Chiefs post a try bonus-point victory.

History is also against Baxter’s men as no team has reached the tournament’s knockout phase after failing to win any of their first three games. Exeter drew with Munster, then lost to Castres away and Gloucester at home.

“We have done the most important thing, which is get to the last stage of the pool effectively in a knockout game,” Baxter said. “It is not as simple as that because we have to do more than just win the game. We have to collect at least a four-point gap to get level with Munster, but we have given ourselves a definite something to go over there and play for.

“The biggest thing for us is to get emotionally recharged. Looking at Munster [at Gloucester] on Friday, they went there absolutely bubbling with emotion, to get in the faces of Gloucester, particularly in the forwards.

“It was almost evident they had a real game plan to go after certain people within the Gloucester team. That is the thing we have got to face first.

“We have to decide that they are going to go there, and stand up and not back down, physically or emotionally. And that will give us our best chance.”

And it gave the English Premiership belated cause for cheer, with five clubs – Bath, Wasps, Gloucester, Leicester and Newcastle – having been knocked out before the penultimate round of pool games had even been completed.

Castres’ replacement prop Tudor Stroe was sent off midway through the second half for a swinging forearm into Chiefs centre Ollie Devoto’s head.

And although wing Taylor Paris and centre Thomas Combezou scored tries for Castres, with fly-half Benjamin Urdapilleta adding one conversion, Exeter were good value and deservedly maintained their European dream.

Baxter paid tribute to England wing Nowell, who scored a sparkling solo try in the number 15 shirt on his first appearance since mid-November after being sidelined by a hamstring injury.

“It was great to see guys like Jack Nowell back, playing so well. We saw Jack picking and going and getting his hands on the ball way more than a full-back normally would. It suited him the way the game went.

“Jack can play pretty much anywhere across the back line. When we are playing that relatively high-tempo game it doesn’t really matter what number is on his back. There is certainly a possibility of him staying there [fullback] for a little while now after playing so well.”

1 No Masters, so Tiger Woods battles son Charlie for green jacket
2 My favourite sporting moment: Roscommon minors restore pride to a county
3 Germany well ahead of the curve as Bundesliga gears up for return to action
4 Stephen Kenny: ‘I want people to come and look forward to watching this team’
5 America at Large: Hurling fan Dowling leading the fight against Covid-19
Real news has value SUBSCRIBE