‘It’s the way the game has gone. Sometimes you just have to run over or through people’ 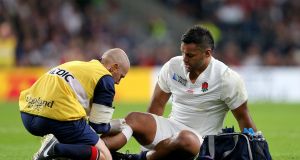 Billy Vunipola has warned that rugby union is more brutal than ever but admits he does not know how the sport can fix the problem.

The Saracens and England No 8, who has started only three internationals in two years because of injuries to his shoulders, knees and arms, was responding to an RFU report that revealed the severity of injuries in top-level English rugby is on the rise.

“The report is scary but I’m not sure how to address it,” Vunipola said. “It is just the way the game has gone. Everyone is so desperate to win that defences have just become so unbelievably tough to break down and sometimes the only way to break it down is to run over or through people.

“I don’t know how it is going to change. You can’t just tell someone who has worked his whole life that he has to lose size otherwise someone else will use size to batter them down.”

Vunipola admits he was unusually nervous during his comeback against Sale last Friday – unsurprisingly given he was returning from his third broken arm in 2018. “I was a bit tentative and anxious,” he said. “Before I was a bit naive that I could fall straight into it, whereas now I am a bit more prepared. And scared as well. But it’s a good thing to have that fear. It will hopefully drive me and help me to protect myself better.”

And while Eddie Jones has promised to treat Vunipola like the “king’s baby” when he returns to the England squad, the player insists he does not need any special treatment. “I just want to be like everyone else,” he said. “I want to play, I want to experience Twickenham again, I want to experience the Six Nations rugby again. And those times on Thursdays when you have those chocolates. Those are the things you take for granted. I want to stay fit but I don’t want to be mediocre.”

Asked what he had learned during all his injury problems, Vunipola replied: “The biggest thing was to become humble again. I think I was becoming too big for my shoes. You don’t know it is happening until you realise how much you rate yourself. This time I want to keep my head down and just work hard.”

One consequence of his injuries is Vunipola is now on tablets after a blood test showed he had very low levels of vitamin D. “I think with my skin colour and not having that much sun, it has affected it,” he said. “I am not big on tablets so it took a lot of convincing. But I guess if it works it will work. We’ll see.”

With Saracens unbeaten in the Champions Cup and the World Cup to come this autumn, Vunipola knows he could have a big 2019 but his biggest wish is just to stay healthy. “I want to be fit and good,” he said. “And I don’t want to be the same player, I want to be better as well.”

He has been told by the Saracens coach, Mark McCall, that he will need to improve on his comeback match against Sale to be considered for England’s Six Nations opener against Ireland. “Ordinarily Billy comes back with a storming performance but this time it was a bit more tentative,” said McCall, whose side play at Lyon in the Champions Cup on Sunday. “Maybe that’s understandable because his return was delayed a week because the consultant was a bit nervous about the arm, and Billy was too.”

When asked whether Vunipola would be ready to face Ireland, McCall said: “Yes, probably. But he’ll have to play better than he did last weekend.”