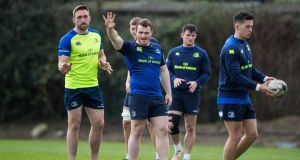 Jack Conan and some of his Leinster teammates during squad training at Rosemount, UCD. Photograph: Inpho

Leinster head coach Leo Cullen has confirmed that 15 players have signed new contracts with the province “for 2017/18 and beyond”.

While the IRFU central contracts for Jamie Heaslip and Devin Toner had already been announced, Cullen confirmed on Wednesday that an additional 13 contracts have been signed as Leinster continue to build for the future.

Among the players to sign on are Jack Conan, Dan Leavy, Adam Byrne and Luke McGrath, who have been consistently excellent in helping Leinster to a Champions Cup semi-final and the top of the Pro12 table. Among the notable absentees at this time are Fergus McFadden, Mike Ross and Dominic Ryan.

“Only a few weeks ago we were able to confirm the promotion of seven players from within our own academy to the senior squad,” Cullen told the province’s website. “The news today of the retention of a further 13 players to the Leinster roster is a huge boost as we look to build towards next season.

“You need to have a strong squad capable of challenging on two fronts.

“We have used 51 players so far this season in the Pro12 and the Champions Cup and with 14 players capped during Ireland’s Six Nations campaign it is vitally important that we have that level of competition and experience across the squad at all times to try to maintain consistency in both competitions.”

“We are trying to play a brand of rugby that excites people and we want to give those supporters in the RDS or in the Aviva Stadium something to really get behind.

“The signings of Scott and James as well as the other lads that we have promoted to the Senior ranks and that we have retained is, I hope, a sign of where we want to bring Leinster next season and into the future.”

Ulster have confirmed that promising young players Jacob Stockdale, Ross Kane and Rob Lyttle have all signed new contracts with the province.

Meanwhile Leinster and Munster have released details of ticket sales for their respective Champions Cup semi-finals.

Munster play against Saracens on April 22nd at the Aviva, with ticket prices ranging from €25 to €80. Tickets are available on Wednesday to club members, 10-year ticket holders, clubs, the Munster branch, sponsors, the squad and associate members.

A limited public sale is envisaged via Ticketmaster Ireland on a date to be announced.