Ulster rise above the rancour to stay in top three contention

Pro14: Province still in with a shot after confidence-boosting win over Glasgow Warriors 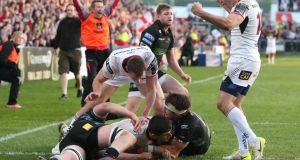 How Ulster needed this.

Five points were required and duly delivered, though only in the last play through Nick Timoney’s second try, to not only keep the province just about in the hunt for a top three Pro14 finish, but also, more vitally, take them beyond being overhauled on the final weekend by Benetton Rugby.

And, what’s more, all the rancour which has engulfed Ulster, both on and off the field in this most turbulent of seasons, notably lifted at a buzzing Kingspan – and not just because this was an apparent home send-off for the long-serving Tommy Bowe and Paul Marshall ahead of their retirements, while the departing Charles Piutau may also not be seen again.

With fourth in Conference B now secured – and a Champions Cup play-off at home to the Ospreys looking likely but not yet certain – Ulster can envisage a possible third-place finish, but only if they produce a bonus point win at Thomond Park on Saturday and if Glasgow do their bit by beating Edinburgh, who are four ahead of Ulster but with two more wins in the bag, and deny them any return from their clash in the Scottish capital.

Though tasting knockout rugby in the Pro14 looks a tall order, Ulster’s operations director Bryn Cunningham was just thankful that the province, after three straight wins, are still in with a shot, never mind the fact that they cannot lose their grip of a fourth.

“We’re now looking forward to going down there,” he said of this weekend’s trip to Munster, who are already in the Pro14’s knockout stages.

“We’ve built on three good wins, the confidence is up and hopefully if we get another day like that [weather-wise] and play some good rugby, then who knows?

“And hopefully Glasgow do us a favour as well. You never know what might happen,” Cunningham said.

“I think that says a lot about a squad that has been low on confidence throughout the season.

“The pressure has been on [them] for the last three weeks, but fair play, they have delivered,” he added, saying that the process to appoint a new coach is progressing well while the situation at out-half is ongoing.

Ulster – missing Iain Henderson from the starting line-up due to the birth of the couple’s first child, a daughter – looked in trouble after John Cooney’s early try, conversion and penalty had helped put them 10-0 up only for the Warriors – who have already guaranteed a home semi-final – to draw level, with Callum Gibbins getting his first touchdown.

But two late first-half penalties from Cooney nudged Ulster 16-10 up at the break and though Gibbins managed a second try to close the gap to one point after 47 minutes, the remainder, with Stuart McCloskey, Jacob Stockdale and Charles Piutau all prominent, belonged to Ulster.

Timoney got over first and then, on the hour, Sean Reidy did likewise – Johnny McPhillips converting Timoney’s first – with Ulster putting impressive width on their game.

With the clock already red it was appropriately over to Bowe to provide the assist for Timoney to wriggle over for that vital bonus point.