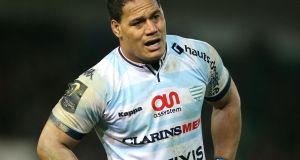 Racing assistant coach Chris Masoe: “It’s good to be underdog but we’ve got to a lot of analysis in the next three weeks,” Photograph: David Rogers/Inpho

Donnacha Ryan’s European Champions Cup debut for Racing 92 was delayed until the third round when their defeat away to Castres left them with two losses in their opening three games and their prospects of reaching the knock-out stages looked seriously imperilled.

But since then they have won 14 of their last 17 matches.

Such consistency in results is almost unheard of by a French side. Not all of this can simply be attributed to Ryan, but it’s not entirely coincidental either that Racing’s sharp upturn in form has been in tandem with the ex-Munster lock’s return to fitness.

In addition to reaching their second European Champions Cup final, Racing have also risen to third in the Top 14 standings, and only trail second-placed Toulouse on points’ difference, albeit there’s a posse of teams in close proximity behind them.

After winning 20 caps with the All Blacks, Chris Masoe played for Castres, Toulon and Racing in a long and distinguished career, and after Saturday’s semi-final win over Munster, the Racing assistant coach gave an inkling into what Ryan’s influence has been like.

“You guys know him pretty well. He has a lot of experience. He knows the competition really well. Munster has always dominated the Champions Cup and the Heineken Cup before, but to have a guy like him in the team is an amazing lift for the boys. The boys love him. It’s something you can’t teach someone but he’s great for the team.

“It’s his attitude. He’s a positive guy. He’s bringing the energy,” adds Masoe, who singled out Ryan’s mindset as significant as any attribute he brings to the Parisian club, particularly as it contrasts with “the French way of doing things”.

“But to have that balance and for him to bring that is pretty good for the team. It rubs off on other players. We do things pretty similar in New Zealand to Ireland, leave it to the players to put a bit of input into it because at the end of the day they’re the ones on the field and we just give them a bit of direction.”

Ryan’s biggest contribution on the field is the energy he gives to Racing’s defence. While it was Teddy Thomas’ elusiveness and pace which provided the cutting edge to their filleting of Munster, Racing’s rise in the second half of the season has been built on the work-rate and accuracy of their defence, which is the best in the Top 14.

On Sunday, they made 184 tackles, almost thrice the number Munster made (64), and Ryan was credited with 18, behind Wenceslas Lauret on 20 and Eddy ben Arous on 19. Racing missed 21, Munster 18, which gave Munster a far worse successful tackling percentage of 72 per cent compared to Racing’s 89 per cent.

“We came into this game knowing Munster have a big forward pack and we did a lot of defence work last week and it paid off,” said Masoe. “Unfortunately the gas ran out for the last few minutes but hats off to the boys, they defended their line pretty well in the first 40 minutes.”

They will need that and more against Leinster’s potent attack.

“Exactly. We’ve got to approach it differently again, defensively. You can see they’ve been playing well. I’ve played against that team and it’s all about their momentum and we’re going to have to work hard to stop their momentum and make sure it goes in our favour.

“I’m sure they’ll be everyone’s pick as favourite. It’s good to be underdog but we’ve got to a lot of analysis in the next three weeks and we’ve got Top 14, back down here [Bordeaux] again next week but it’s a good opportunity for us.”

Racing’s last two regular season Top 14 games are away to 11th placed Bordeaux next Saturday and at home to 12th placed Agen the following Saturday.

They could make the semi-finals by finishing in the top two, thus having a bye from le barrage a week after the European final and putting them within one match of emulating their achievement in reaching both finals two seasons ago.

By contrast, Leinster need just a point in the Sportsground next Saturday to ensure a home semi-final in the Pro14, and thus also earning them a bye from the quarter-finals the weekend before the Bilbao final.

At face value, this appears like a slight advantage for Leinster, but Masoe thinks otherwise.

“Not really. We just focus on one game at a time really. The championship is something that is special for the French, that is their priority – it’s almost similar to winning a Six Nations. But we’re just going to take it one game at a time, thankfully enough we’ve got a good squad to rotate and hopefully we’ll come out on top.”