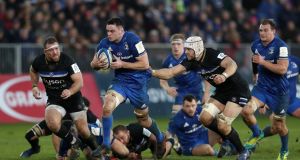 Leinster’s James Ryan gets away from Bath’s Dave Attwood in the Champions Cup pool one match at The Recreation Ground, Bath. Photograph: David Davies/PA Wire

On this dark, blustery evening in a white tent beside the scene of Leinster’s latest victory, Bath’s Sam Underhill offers his forensic expertise.

He appears as a deep thinker, never mind a tearaway flanker of the highest possible renown. Ask Ardie Savea and Michael Hooper after recent Twickenham scrapes. Ask Dan Leavy and Josh van der Flier after this fascinating ground battle required every inch of the champions’ resolve to escape with victory.

“I don’t know how many turnovers they got today [seven], but it was too many,” said the possible future captain of Leinster, Ireland and perhaps a Lions team that would surely include Underhill.

Witness the English man surpassing Springbok Francois Louw as the dominant figure of breakdowns, only for Bath’s European interests to all but evaporate because another 22-year-old soared to a high plain of athleticism.

Man of the match was a classically close contest but Ryan prevailed. The secondrow, who hands each individual award to the mother before moving ever onwards, did stall to punch holes in the collective performance.

“We got to be there earlier and if we are not there earlier we got to be more aggressive to get them off the ball. [Underhill and Louw] are super players and we knew that coming into the game. That’s definitely an area we got to brush up on.”

Bath’s fatal flaw was neatly summed up by the outstanding Underhill.

“The reigning European champions is an easy game to get up for,” he said. “The emotional bits are fine but you need that professionalism, that clinical edge to bring that intensity.”

In the winter of 2018 Underhill has severely disrupted the All Blacks and now Leinster possession. Leavy and van der Flier were fully engaged – roll on the Six Nations opener on February 2nd – but they were outclassed by the Bath openside who arrived at this moment via the Ospreys having failed to climb the Gloucester ladder.

But Underhill must be satisfied with individual achievement and nothing more because the Leinster machine, led by Ryan’s staggering 17 tackles and 14 carries, glided to victory with a lovely intercept try by Jordan Larmour before Ross Byrne’s crucial late penalty when Johnny Sexton was receiving treatment for a damaged calf.

Only rugby’s injury toll can deny these young rivals from owning the modern era. Both 22-year-olds carry real and rare presence.

Leadership oozes from their pours.

“It was a big test,” said Underhill. “Josh van der Flier and Dan Leavy are very good opensides, and across the frontrow there are a lot of jackals, and James Ryan is smart at the breakdown. I think we did pretty well, most of the game, the inside support leg, we took that away. But not for the whole 80. Give them 10 minutes of poor cleanouts and they took the opportunities they got.

“You can’t have an efficient attack without an efficient breakdown,” he elaborated. “It’s become another restart. Every breakdown is an opportunity to win the ball back or to keep the ball.

“It’s not a complicated game. Either your support is good or it’s not.

“Even the best seven in the world, if you don’t give him an opportunity to get on the ball he shouldn’t get in. It’s not a complicated thing, it’s effort, it’s work rate and a mindset but you got to keep that for the whole 80 and not just in patches.”

Sam Underhill and James Ryan embody these words. Ideally, the integrity of this tournament is protected by a renewal of this wonderful sporting feud in Dublin this Saturday.

Bath director of rugby Todd Blackadder promised a “full metal jacket” selection but Toulouse’s victory over Wasps may alter his initial decision. Over Christmas they face Wasps followed by Leicester to avoid a slide into relegation strife.

“Nothing between us,” Blackadder continued. “It was a massive arm wrestle that came down to a couple of decisions.”

With this tense struggle locked at 7-7, a high ball was launched into Leinster’s 22. Astonishingly, Underhill leaped over James Lowe before crashing to earth with precious possession, but Bath lacked that “clinical edge”.

“I won’t be doing that again. Got a bang on my leg. Physio came on and said either your leg is broken or you are fine, get on with it.”

Thirdly, as the seconds ticked into red, Wilson took his time to land a bonus-point penalty. That lack of intent, to quickly add three points before chasing a draw off the restart, probably ends Bath’s European interests. Maybe they’ll seek to engage the champions on their home patch.

“People sometimes assume, ‘Aw, you win a game away’ and you can just naturally rock up but we’ve been burned by that in the past,” warned Leinster coach Leo Cullen in reference to five seasons ago, his last as a player, when Northampton spoiled the festive celebrations.

The unlikely scenario has Blackadder unleashing Louw and Underhill on the Aviva Stadium. The response of Leavy and van der Flier would be worth the ticket price alone. We know what Ryan will deliver.

The sport needs Bath to go for broke.

“It’s still a game of rugby,” Underhill added. “There’s still 15 blokes who want to beat you up. You want to have pride in your performance irrespective of where we are in the pool and what we have done.”