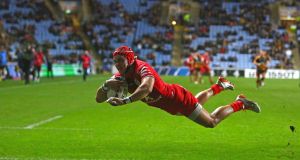 Wasps’ hopes of European Champions Cup progression were all but ended after suffering a 24-16 loss to Toulouse at the Ricoh Arena.

The under-pressure Coventry-based side needed to beat an in-form Toulouse, having lost to Leinster and drawn to Bath in their opening two fixtures in Pool 1.

But they fell to their sixth defeat in seven games after tries from Cheslin Kolbe and Sofiane Guitoune, plus 14 points from the boot of Thomas Ramos, ensured four-time champions Toulouse maintained their perfect record in the competition.

Wasps entered the game unbeaten in 12 home games against French opposition and began well in tricky conditions, taking an early lead through Lima Sopoaga’s penalty after Kieran Brookes’ charging effort was ruled out by the TMO inside six minutes.

Toulouse soon settled and combined brute force from a giant forward pack with pace and precision from the backs.

Wing Kolbe put his side on the board with a superb solo effort, which saw the pacey South African avoid three tackles at the halfway line before running away to the corner.

Ramos missed the extras and Wasps captain Elliot Daly — rumoured for a summer exit to Saracens — put his team back ahead with a huge 50m penalty.

He added another on the 30-minute mark, but the visitors lost Maks Van Dyk to the sin-bin after a high tackle on Tom Cruse.

Wasps immediately capitalised on the man advantage with their first try.

Michael Le Bourgeois powered through loose defending from a lineout with Will Rowlands finishing off the move at the posts.

Wasps had to hold firm before the break to extinguish two promising Toulouse attacks but did enough to edge out the first half.

Toulouse continued on the front foot with Ramos adding his third penalty from close range and it soon got better when centre Guitoune crossed after collecting Maxime Mermoz’s reverse ball.

Louis Madaule became the second Toulouse player to be sent to the sin-bin, for a stamp on Brad Shields, but Wasps failed to make the extra man count this time as the visitors cleared their lines.

The French remained in control of proceedings, despite the player deficit, and were good value for victory to remain top of the group ahead of next weekend’s rematch with Wasps.