Connacht make wholesale changes for the visit of Perpignan 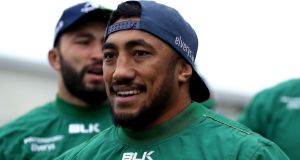 Bundee Aki: one of three Ireland internationals welcomed back to the Connacht side for the game against Perpignan. Photograph: Bryan Keane/Inpho

Kick off: 3pm. Venue: The Sportsground.

Back-to-back wins on what was by all accounts a hugely successful two-week trek to South Africa has underlined Connacht’s status as the most improved side in the Pro14 so far this season.

However, mindful of the toll those mini-tours have taken on other teams, Andy Friend had opted to welcome back some internationals while resting many of those who helped to beat the Cheetahs.

In what looks like a carefully pre-planned strategy, only two of the starting XV from last week’s win in Cape Town are retained, namely Matt Healy and Robin Copeland. In the process though, Connacht welcome back a trio of Irish internationals who were involved in the November Tests, namely Bundee Aki, Finlay Bealham and Quinn Roux for the visit of Perpignan.

With Tom Farrell, scorer of their superb first try last week, and Kyle Godwin rested, Aki will be partnered by 22-year-old Academy player Kieran Joyce, who is set to make his Connacht debut.

Bealham’s return to the front row sees him line up alongside hooker Dave Heffernan, who has been named as captain, and loosehead Peter McCabe. After three appearances off the bench this season, lock Joe Maksymiw comes in for his first start alongside Roux.

In the back row, the fit again Eoghan Masterson makes his seasonal reappearance and is named at blindside. Colby Fainga’a starts at openside having impressed on the tour to South Africa.

With Caolin Blade and Jack Carty also rested, there is a new half-back pairing as David Horwitz is named at outhalf alongside James Mitchell at scrumhalf. In the back three, Darragh Leader comes in at full-back and Cian Kelleher on the right wing.

Perpignan also make 13 changes from last week’s line-up that lost at home to Begles Bordeaux, but that being their 11th in 11 games since returning to the Top 14, this is due to rather more forlorn circumstances.

Six points adrift of Sale, to keep on their shirt-tails Connacht probably need a big haul over these two games against Perpignan.

“These two games will tell a lot,” says Friend.

“We have won one and lost one so far so these back-to-back games will have a huge say in where we stand in this competition. The mood in the squad is hugely positive. We are seeing some really strong competition developing for places and that is important. We want to take our good form into the Challenge Cup especially in front of our home crowd.”

1 My favourite sporting moment: Roscommon minors restore pride to a county
2 Pro14 nations could miss out on €15m in TV revenue if league is not completed
3 Harry McNulty: Seeing the world, from Sevens to dog-sledding
4 America at Large: Hurling fan Dowling leading the fight against Covid-19
5 Spectator sues Tiger Woods and his caddie over incident in 2018
Real news has value SUBSCRIBE