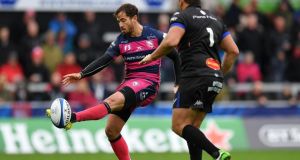 Gloucester became the first English club to win a game in this season’s Heineken Champions Cup as they beat Castres 19-14 at Kingsholm.

The Gloucester playmaker, who was left out of Jones’ latest training group last month, kicked four penalties and a conversion for a 14-point haul as the England boss looked on.

Scrumhalf Callum Braley also scored a first half try for Gloucester, with their Pool Two triumph following European defeats for Wasps, Bath and Leicester, while Gallagher Premiership leaders Exeter were held 10-10 at home by Munster.

Whether Jones feels that Cipriani has done enough to prepare for Tests against South Africa, New Zealand, Japan and Australia next month remains to be seen, but his tactical leadership could not be questioned, even if there were a couple of errors in open play.

Wing Tom Marshall and lock Tom Savage both made their first starts of the season for Gloucester, although injuries denied them the likes of Ed Slater, Willi Heinz and Ruan Ackermann in the club’s first top flight European game since 2014.

Despite heavy rain testing the handling skills of both teams, Gloucester settled impressively as back row pair Ben Morgan and Jake Polledri made some strong carries and Cipriani kicked with accuracy and length.

Cipriani’s 10th minute penalty put Gloucester ahead, but it should have been more shortly afterwards when Braley broke clear from the base of a ruck on halfway and sent Marshall over to score.

But referee Marius Mitrea consulted with the television match official, and the score was harshly disallowed as Gloucester prop Fraser Balmain was adjudged to have obstructed a Castres forward before Braley picked up and surged clear.

Dumora then kicked an equalising penalty, yet Gloucester continued to dominate possession and territory, with Cipriani cleverly mixing his tactical approach, and his second successful penalty eight minutes before half time edged the home side back in front.

A Dumora drop-goal put Castres back on level terms, only for Gloucester to finally reward their dominance with a try as Cipriani sent Marshall clear, and his inside pass to Braley allowed the scrum-half an unopposed run, and Cipriani’s conversion opened up a 13-6 lead.

Gloucester dominated the third quarter, pinning Castres inside their own 22, and Cipriani’s third penalty gave them a degree of breathing space before another successful strike made it 19-6 as Castres’ discipline levels dropped.

Laveau’s well-finished try, though, reminded Gloucester that they could not switch off, and Dumora’s 71st minute penalty made for a far more tense finish than it should have been, given Gloucester’s dominance.