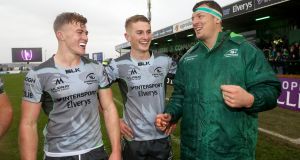 Not the “prettiest performance” for an opening European fixture, but Connacht are up and running in the Challenge Cup stakes after a victory over Bordeaux-Begles.

Now the competition goes up a notch as Andy Friend’s Connacht head to Sale, who maintained their credentials as the number one seed with a 41-24 bonus win over Perpignan. It puts the Premiership side in the driving seat.

“You want five points at home if you can,” said Friend. “The other important thing is to deny opposition points, which we did, but we still had opportunities and moments to get five. So yeah, we are disappointed with that, but we’ll take the four and get ready for Sale.”

Conditions dictated this was no show-stopper, and, as expected, French visitors Bordeaux-Begles provided a stern early test in what was an underwhelming match, but in the main Connacht’s mobile forwards faced up to the visiting Bordeaux bruisers.

“Our forward pack continues to pave a pretty healthy platform for us. The scrum was dominant again, we have good depth and competition in that area, but we need to be better as a team to take advantage of the possession we are getting and to make sure we are putting more pressure and putting more points on the opposition.

“Today was only our second wet weather game and you could see we were caught between chancing our arm or turning them, and I felt there were times today to chance our arm a bit more and we didn’t. To me we should have kept possession and kept going forward. Other times we did kick correctly, but the kick wasn’t what we wanted it to be, so we made life hard for ourselves.”

Using the competition to rotate his players after a tough opening to the Pro14 campaign, Peter McCabe and Conor Carey were both given second starts, and hooker Shane Delahunt his first. And with Conor McKeon, and debutants Conor Fitzgerald, C De Buitlear and Joe Maksymiw introduced after Connacht had sewn up the game, Friend is building a competitive environment for his players.

“The plan is to give blokes an opportunity to show what they have got, and if they are good enough, we will pick them. That has been the message throughout, we saw that today. 12 points up with 15 minutes to play, it was ‘right oh, have a go’. We could have easily have kept Jack [CARTY]and [CAOLAN]Blade out there, but we have to give these blokes a chance, and trust them, and the score line remained the same which was good.”

McCabe made an impression until he was forced off late in the opening half. Solid in the scrum, where Connacht won an opening penalty, McCabe also showed his ability to break the line. After Carty set up field position with a superb touch-finder , the former Munster prop cut through the defence and, although tackled short of the line, Kyle Godwin, in his first start on the wing, was quick to secure possession and dart over after 13 minutes.

The versatile Australian back, who won the man of the match accolade, also grabbed the second try soon after half-time. In the right place at the right time, his superb pick-up off the deck helped Connacht into a 17-3 lead.

However it was not all one-way as the Top 14 side showed their mettle, but in the face of a well organised defence, Bordeaux’s only first-half points came from a penalty which outhalf Lucas Meret kicked. And when Bordeaux regained a period of dominance after Connacht number eight Robin Copeland was yellow carded in the second half, replacement backrow Afa Amosa charged over for the French side’s only try which Meret converted.

However Connacht sealed the game when Ireland prop Finlay Bealham posted the third try from a well-worked maul - cue the introduction of the youngsters. In the end Connacht were forced to see out the game with 14 players when McKeon damaged his shoulder after just four minutes in his first start this season. And with three openside flankers also on the field - Copeland never returned after his sinbin - there was a makeshift look to the side.

“We have been saying discipline is important and we can’t be giving those way, so for me, it was, can we survive without Robin there today? Yip, we can because Connolly has played eight, we know JB [BUTLER]has played eight, and they can mix and match, and so we made that call. It wasn’t by design, but that’s how it finished up.

“We are second bottom in discipline. We went through every penalty last week and said to the players, ‘is it a red penalty which means you’ve given the referee no choice. Is it an orange? Thats good play by the opposition. Is it a green? The ref has made an error’, and we had far too many red penalties that we gave away to Ulster.

“We’ll go through this game too, but I know straight up there were five red penalties and five is too many, so it’s an area that has crept into our game. Because it’s been an issue, people can see it is an issue, and then it becomes a perceived issue, so we have got to be even squeakier clean and get it right.”