Carbery and Beirne speeding up pace of Munster revival 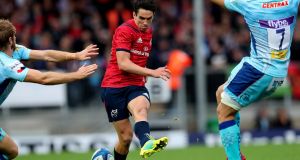 Maestro rising. The wind that shakes the 22-year-old came blowing in the 80th minute.

Old generals O’Gara and Sexton saw a dribbling pill gift Exeter victory and know such an error is the only way to truly learn. Try the yips in a European final, Joey, or suffocate from internal and external World Cup pressure in New Zealand, kid.

“You said it there – for a 22-year-old flyhalf he was brilliant,” offers 38-year-old mentor Johann van Graan, a double act now and perhaps ever more, after the 10-10 draw at Sandy Park on Saturday. “[Carbery] said his heart fell right down to his stomach with that last play. It was 100 per cent the right decision, but the wind just took it. He was then hoping it would bounce and hit the post, but it just kept going and going.”

So did these unbeaten Chiefs – 22 pounding phases in the Munster 22 until undone by error – yet Peter O’Mahony’s mob proved their equal and Rob Baxter understandably hopes to hell that qualification is secured before the return game in Limerick.

“It would be an incredible occasion, for us, if it was winner takes all at Thomond Park,” Baxter grimaces ever so slightly. “I hope maybe it doesn’t happen. I hope we will both be through when we get there.”

Who bets all the money is still riding come 5.30pm on January 19th as sleeting rain turns sod to ashes.

See the red Munster army lounging out the back of Sandy Park heralding this bright new era upon themselves. They know renewal comes from Carbery and the other Kildare native who slaloms across grass like imported Kiwi.

“Tadhg was excellent,” goes Van Graan, “It’s the small things people probably don’t see. His poaching was so good and it’s his first season running a lineout, and going against a team like Exeter in this wind, and that line he ran in the first half when he almost scored. The biggest thing is he gives you an all-round performance, an 80-minute performance, he doesn’t seem to stop, just keeps working around the corner. I’m very glad he is with us.”

The swelling Munster ranks do see, Johann, they see a 26-year-old of O’Connell and Axel’s ilk with modern essentials.

What on earth to do with Beirne after such a regal display?

Not Munster – that’s easy, keep building their dreams around him and Carbery with Peter O’Mahony suddenly blessed to have real quality to match his insane desires. And Conor Murray to return (not that Duncan Williams owes anyone anything anymore) – but November and the prize fight against suddenly beatable All Blacks.

Perhaps launch Seán O’Brien and Beirne off the bench as James Ryan and Josh van der Flier demand starts. O’Mahony at six seems a lock but what of Dan Leavy and Iain Henderson? Devin Toner has never been so impressive. CJ Stander and Jack Conan too.

Ridiculous. It has never been this way – not in 2009, not last March – but Beirne’s behaviour against Gerbrandt Grobler’s Gloucester and Carbery matching skills with Danny Cipriani could clarify Joe Schmidt’s whirring mind.

What is known keeps unfolding before us – Leinster are immense, and Toulouse will soon agree, but Munster are regenerating.

Pity their scrum can be manipulated. Nothing to do with loosehead duo Dave Kilcoyne and particularly James Cronin. That’s the obvious flaw.

Not scrumhalf, not anymore. They would also profit from Test match strides in midfield, like Henry Slade, but Chris Farrell should eventually return.

No matter. Nothing should rattle their bones until spring. Carbery’s 73rd-minute line kick reveals the future.

“He is up there with some of the very best 10s I worked with in South Africa,” says Van Graan. “Derick Hougaard, when he was 18, Morne Steyn, Johann Goosen. Joey is going to be a massive player for us in the future.”

O’Mahony concurs about both new lieutenants.

“You see what you get. He is obviously a gifted footballer. He has a real calm way of going about his job. He is an attacking threat. He has a great passing technique. When you get that in a 22-year-old kid, it has the potential to grow into a very experienced outhalf. He has played very little rugby there. You can see with the run of games he is getting, he is settling in. He is getting comfortable with our game plan.

“It is great to look around and you almost know what you are going to call together. There is a good bond there between the lineout callers and the game management group and that is what you need in that dynamic. You need guys that you kind of know what they are thinking and he is on the right page.”

1 Gerry Thornley: Ireland don’t want to box themselves into a corner
2 Kevin McStay: Maybe a knockout All-Ireland Championship is the long-term solution?
3 The Offload: Ireland are stuck in no man’s land
4 Simon Easterby admits Ireland may need to take new line on maul
5 Klopp sings ‘multi-instrumentalist’ Firmino’s praises as Brazilian back on form
Real news has value SUBSCRIBE

Fennelly eager for the chance to prove himself again 01:08
Ed Byrne, Johnny Sexton and Rob Henshaw to miss clash with Georgia 01:00
Simon Easterby admits Ireland may need to take new line on maul 01:00
O’Neill braced for meeting with his native county 01:00
Lancaster says Ireland need to finish series on a high 00:30
Crossword Get access to over 6,000 interactive crosswords