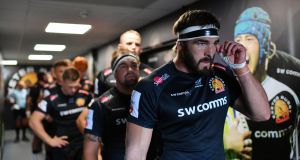 The summit of Exeter’s European achievements in five campaigns has been one quarter-final three seasons ago. Photograph: Dan Mullan/Getty Images

In the storied history of the Heineken Champions Cup, none too surprisingly there’s been a particular edge between the Irish and the English, and not just on the pitch. Amid the Sky-generated hype around the Premiership, Ronan O’Gara famously maintained that Irish players were every bit as good as English ones – perish or cherish the thought – and backed it up with a match-winning penalty from halfway on the ensuing Saturday when Munster stormed Leicester’s Welford Road citadel.

That was on the opening weekend of the 2006-07 Heineken Cup, when Munster were the reigning champions, but as events transpired the Tigers would become the first team to beat Munster at Thomond Park in round six.

Meanwhile, in their desire to bring the old ERC to its knees, amongst the motivation for the English club owners was a desire to have the tournament’s headquarters moved from Dublin, which they detested, even if this meant moving to that noted rugby hotbed of Neuchatel in Switzerland.

All seemed right in their world when the Premiership supplied five of the eight quarter-finalists three seasons ago, with not one from Ireland or any of the then Guinness Pro12 in the last eight.

Yet, from this signalling a shift in the balance of power, the following season there were two apiece from Ireland and England in the knockout stages, and last season Munster and Leinster were back again, with the latter knocking out the Premiership’s only qualifiers, Saracens, in the quarter-finals.

Wrench the trophy back

The Premiership’s best again loom large on the provinces’ horizons in the opening exchanges of the Heineken Champions Cup, with a trio of Anglo-Irish meetings peppering this weekend’s first round, and Munster set to face English opposition again a week later.

The Irish have been pitted against a strong Anglo hand in that the three provinces will face four of the Premiership’s top five, although they’ve assuredly done well to avoid Saracens in the group stages, given the English champions look best equipped to wrench the trophy back into their control after winning it for the two campaigns prior to Leinster’s triumph last season.

Along with Saracens, Exeter have been a cut ahead of the rest in the Premiership over the last three seasons. Saracens have won three of the last four Premierships, while beating Exeter in the final three seasons ago and last May, with the Chiefs claiming their first ever title two seasons ago after beating Saracens with a last minute try by Sam Simmonds in the semi-final at Sandy Park.

As forecast, their duopoly looks even stronger this season, with little to choose between the rest. Exeter go into the opening rounds in Europe after actually overtaking Saracens atop the Premiership table. After Exeter’s 39-25 bonus point win away to Bath on Friday night, Saracens were denied a bonus point win for the first time in six matches this season when pushed to a 25-20 win away to Harlequins on Saturday.

So Exeter lead Saracens on points’ difference, each having won six from six with five attacking bonus points, and each having scored 29 tries apiece. They are already ten points clear of the peloton, with Wasps (Leinster’s opponents on Friday night at the RDS) again looking the best of the rest. That said, Munster host fourth-placed Gloucester on Saturday week, and Ulster host fifth-placed Leicester on Saturday.

In many respects the most interesting looking game of the opening weekend is Exeter v Munster at Sandy Park on Saturday, primarily because Munster, even if it’s been now more than a decade since the second of their two triumphs, are proven European superpowers. In Europe, they and the Red Army bring a certain cache.

By contrast, Exeter haven’t proved themselves in Europe much at all. In five previous campaigns, the summit of their achievements has been one quarter-final three seasons ago, which they lost agonisingly 25-24 to Wasps.

Last season, they managed a double over Montpellier, but Leinster completed a double over them before Glasgow came alive to skin them out wide in round six. In 31 European matches they have won 12 and lost 19.

They need to make their mark in Europe. Otherwise, it conveys the impression that the Chiefs may be a little one dimensional.

This is not quite on the level of another team in this pool, and Munster’s most frequent opponents, Castres. In 14 previous campaigns, the current French champions have exited at the pool stages 13 times, winning 29 matches, drawing three and losing 50.

But it’s not a record that befits one of the two most successful clubs in England over the last three or four years, and their long-standing head coach Rob Baxter has admitted as much. They need to make their mark in Europe. Otherwise, it conveys the impression that the Chiefs may be a little one dimensional.

That, in some respects, they are flat track bullies; that their peerless ability to pitch tent in the opposition 22 and stay there until they score through their suffocating mauls and unrelenting pick-and-goes isn’t enough to bring to the European table. Of their 29 tries this season 17 have been scored by their forwards, 12 by their backs.

By contrast, this is Munster’s first full season under Johann van Graan and a young coaching ticket. They were clearly trying to add more arrows to their quiver last season and bringing their outside backs into the game more, and this is all the more so with Joey Carbery at outhalf.

The set-piece strengths remain intact, but in the last two weeks there have been clear signs of them adding more variety to their attacking game and accuracy to their skills. Of their 27 tries this season, 14 have been scored by backs.

Yet Exeter’s squad is much more settled, their project is at a much more advanced stage, and they desperately need a win on Saturday.

You sense Saturday’s first meeting, and the return at Thomond Park in round six in January, will go a long way toward defining both of their European campaigns, and with it much of their season.