Gerry Thornley: Leinster have enough to take the final step 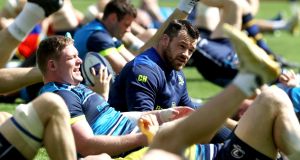 If Leinster are to return to the promised land and bridge a six-year gap to earn that fourth star on their jerseys, it will be one to tell the grandchildren about.

Having beaten the leaders of the Top 14, the Premiership and their rival Pro14 conference, at home and away in the pool stages, and then dethroned the back to back European champions, now they must overcome the swing-from-the-hip reigning Pro14 champions.

And, were they to do that, who knows what might await them in the final!

That may be for another day. Today, Leinster have earned themselves a chance to banish the first of two anti-climactic semi-finals which left a few rocks under their towels last summer.

The first was in this competition against Clermont in Lyon, when the abiding lesson will have been the concession of 15 points in the first 14 minutes. The second, at the RDS against the Scarlets in the Pro12 semi-finals, ought to serve as an even more salient warning as to the merits of the Welsh team’s potent running and offloading game.

Having reached this point with an even more impressive and varied run of form, as they showed with their sleeves-rolled-up victories over Exeter, Leinster looked to also be in better shape than a year ago after that quarter-final.

Whereupon Leinster lost Luke McGrath, who was outstanding in that quarter-final. In addition to McGrath’s improvement this season, a year ago Jamison Gibson-Park’s form would have made this less of a concern. It looks as if the three non-EU passport holders into two riddle has affected his confidence. He and Joey Carbery did not have good outings in last week’s defeat against Benetton, but with Johnny Sexton and co, he went well in the final pool win in Montpellier.

Stuart Lancaster is an advocate of giving youth its chance, but compared to that Scarlets’ semi-final, Rob Kearney and Fergus McFadden play instead of Carbery and Adam Byrne, giving them a more experienced back three for this huge occasion- in tandem with Isa Nacewa, as James Lowe misses out here.

When Nacewa was asked about it, he just said: “Pass.”

Pound for pound probably the best overseas signing by any province – which is saying something – nevertheless it’s still a big ask for the 35-year-old Nacewa, who has had only four outings since those Exeter win, all at inside centre, especially given the Scarlets’ proficiency for isolating opposing wingers defensively. Nor did last season’s semi-final against Clermont, when yellow carded, go well for him. Then again, class is permanent, and Williams may have done Leinster a favour.

Robbie Henshaw is back and reunited with an in-form Garry Ringrose, and Sexton will hardly have an off-day like that semi-final against the Scarlets.

Only Tadhg Furlong remains from the pack which started in the RDS. The second row looks stronger, and the emergence of James Ryan and Dan Leavy, if he can somehow retain his level of performance, has given their pack youthful oomph. Leinster didn’t have Sean O’Brien that day either, and won’t for the remainder of the season after he underwent a shoulder operation yesterday.

Word is to, Leinster also overtrained that week, a mistake which, again, they’ll hardly repeat. Yes, a year is a long time in rugby.

“Obviously, 12 months on from a painful loss in Bordeaux you’ve got to learn some hard truths,” said Nacewa. “A lot of guys have kicked on to a Grand Slam success and taken learnings from that, so you can go a long way in 12 months but it still comes down to 80 minutes tomorrow.”

As for the Scarlets, Liam Williams has moved on, the brilliant Jonathan Davies is sidelined and with injuries in their back three, Leigh Halfpenny switches to wing and Rhys Patchell to full-back, with Dan Jones at outhalf.

The hugely influential Ken Owens was missing in the RDS, and is now part of the Scarlets’ first-choice Welsh front row. Tadhg Beirne and James Davies probably remain the best twin threats over the ball in the competition, and the Scarlets are lethal in transitioning from defence to attack, while Aaron Shingler is in the form of his life.

“For us, it is a semi-final, it is an opportunity,” said Wayne Pivac. “It is 80 minutes away from creating history, being in our first [European] final. That is the way we are approaching it.”

If Saracens were a team who had peaked, the Scarlets are a team on the up. Akin to last season, the Scarlets arrive on a roll after a difficult start to their Euro campaign, when losing their opening two games five days apart, with their brand of offloading and support play also tailor-made for the belated farewell of winter.

Their running rugby was again breathtaking in the win away Bath but against Toulon and La Rochelle, the Scarlets confirmed they have added pack strength and defensive resilience to their mix, fine ingredients to mix with Leigh Halfpenny’s goalkicking and the sheer opportunism of Gareth Davies and, even if now at full-back, Patchell.

One can envisage both teams eschewing kicks to touch and hence a high amount of ball in play time, with both sniffing opportunities off turnovers, especially so in the case of the Scarlets’ superior counterattacking game. It could be a fairly high-scoring, fluctuating encounter too.

Leinster do have home advantage too, and with EPCR’s finger on the pulse in Neuchatel, ticket sales reached 48,000 or so yesterday, leaving almost 4,000 still for sale on ticketmaster.

That said, if Leinster concede as much possession as they did against Saracens, one imagines Scarlets will make more use of it with the greater variety of their attacking game, all the more so if the confident Welsh outfit get ahead early on.

Leinster may need to take a leaf out of the Leinster-infused Ireland blueprint against a Scarlets’ hued Wales, by dominating possession and applying scoreboard pressure.

They have enough in them.