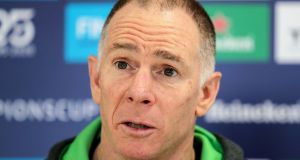 Andy Friend: “We have 80 minutes coming up against a quality side so we know we have to be on our game.” Photograph: Laszlo Geczo/Inpho

Connacht are preparing for a possible defining Champions Cup fixture when Toulouse visit the Sportsground on Saturday.

Toulouse return to Galway as French champions and unbeaten in pool five; Connacht, a point behind Gloucester in third place, need a win to keep them in the hunt for a possible quarter-final.

Important to be still alive for now in the European competition, Friend says a decision will be made “in the 80th minute on the whistle” whether it could be time to switch focus solely to the Pro14.

“We know what the equation is, we want to get that win, we are back at the Sportsground, we want to be winning in front our home crowd, so it’s a very important game for us for many, many reasons,” the Connacht coach says.

A massive boost is the return of some 10 players after three successive interprovincial defeats over the Christmas and New Year.

“It’s a good spot to be in,” says Friend after a tough and attritional festive period. “You need to have your stronger and most experienced players out there, so there is some really good quality and experience coming in.”

Friend says both Carty and Aki have “bounced back” after their break.

“We saw when Carty came back, and a lot of the players from the World Cup, that it had been a really tough campaign for those men. I thought Jack’s last 20 minutes against Munster was fantastic. He said before that he didn’t feel like he was fatigued, but he went away on that break and halfway through I’m getting a text, saying ‘didn’t realise how tired I was”, but he’s doing great now, and has bounced back in here with Bundee full of energy.

“They can’t wait to get out there, and I can’t wait to watch the pair of them to be honest because when they have that energy back that you see in their eyes , they are pretty special for us. Jack was one of the shining lights last year for us and he was rewarded with the green jersey, so he knows how to get back there.

After last weekend’s hefty defeat to Leinster, Friend believes “Toulouse, in a weird way is exactly what Connacht need”.

“We knew it was always going to be a period when we were going to be stretched, and we have been. Now we have Toulouse and that is the beauty of the game of rugby. It’s a chance to show what we have, and really important to perform. With every win, the next loss is coming and vice versa, so that is the way we are looking at this one.

“We haven’t had the performance or the result we wanted in the last three weeks, but we have 80 minutes coming up against a quality side so we know we have to be on our game, so that is our target, and the focus is on is our performance.”

Reports that French side Lyon are looking to sign Colby Fainga’a were no surprise for Friend.

“I imagine, any club worth its salt would be looking at Colby. He’s a hell of a footballer. I have no doubt his agent and himself are fielding calls from everywhere. At the end of the day it is Colby’s call. He is at a stage in his career when he has to be thinking about all sorts of things, he has a family, two young children and it depends what sort of money gets thrown at these men too.

“I know Colby loves it here in Connacht and I know his wife and family are settled here, but you never know. He’s at a different stage in his career than other young men.”