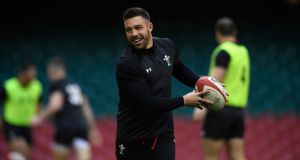 Rhys Webb is to leave Toulon and return to the Ospreys. Photograph: Stu Forster/Getty

Wales scrumhalf Rhys Webb will rejoin the Ospreys next season in a deal that will pave the way for a return to international rugby.

The British and Irish Lions star is returning to Wales after Toulon agreed to release him from the final year of his contract “for family reasons”.

But Bridgend-born Webb will now be available for Wales from next season after signing a two-year-deal at the region where he made his debut in 2008.

“It’s just great to come back where rugby all started for me,” Webb told the official Ospreys website.

“I am really looking forward to the challenge and fighting for the Ospreys jersey again.

“I have loved my time in Toulon but it’s a relief to come home to the Ospreys, it’s where my family are, where I was brought up, and where rugby all started for me.

“To return to play for my home region again is just really special for me and I am so grateful for the opportunity to be able to do that again.

“I have been away for two years, and I know there have been a lot of changes and that there are a lot of exciting young players coming through and some familiar faces too. I am looking forward to the challenge.

“Hopefully, I can pass on my experience to the younger players and I am determined to do as much as I can to help the team.”

Webb’s move to France caused much consternation in Wales as he had played two Tests on the Lions’ tour of New Zealand in 2017 and was regarded among the best scrumhalves in world rugby.

He was not eligible for Test selection under the Welsh Rugby Union’s controversial 60-cap policy, the number of caps needed for overseas players to represent Wales.

“As I said at the time, nobody turns down Toulon and I wanted to experience something different,” Webb said.

“I am thankful that they have released me a year early from my contract and I am as excited about returning to the Ospreys as I was at going to France.

“Everybody knows how important my family is to me and being able to return home, especially to the Ospreys is massive for me.

“I just can’t wait to pull the jersey on again and to run out in front of my fellow Ospreylians.”

Webb played 154 times in 10 years at the Ospreys, his 39 tries placing him fourth on the region’s all-time try-scorer list.

Ospreys managing director Andrew Millward said: “All of us at the Ospreys are delighted that Rhys has decided to come home.

“He is a world-class scrumhalf and has proved that with the Ospreys, Wales, Toulon and the Lions, and to be able to bring him back home is something all of us should be proud of.

“The Ospreys are in his DNA. During our discussions with him, it became clear how important the Ospreys were to him and how much he wanted to wear the jersey again.

“His signing is a statement of our intent and ambition to build a squad capable of taking on the best in the Pro14 and in Europe.”