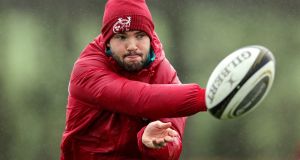 Munster outhalf Bill Johnston is expected to move to Ulster in the summer. Photograph: Laszlo Geczo/Inpho

Bill Johnston, Munster’s talented 22-year-old outhalf, is set to join Ulster next season. Due to the logjam in the position at Munster since the arrival of Joey Carbery, the Clonmel-born former Irish Under-20 international has been restricted to just four starts this season and has decided to relocate to Ulster.

Johnston has been highly regarded in Munster, where the late Anthony Foley gave him his first taste of senior rugby shortly after leaving Rockwell, where he helped guide the school to the Munster Senior Cup.

Johnston recovered from a dislocated shoulder to make his debut for the Irish Under-20s in the 2016 World Rugby Under 20 Championship, scoring 11 points in the comeback 26-25 victory over Wales and another 10 in the historic win over New Zealand, but was forced off with another dislocated shoulder injury.

A serious ankle injury midway through the 2016-17 season contributed to him making just a dozen competitive appearances in three seasons, but now he clearly feels he has a better chance of progressing his career under Dan McFarland’s upwardly mobile Ulster.

In doing so, he is following a route taken by other players who are represented by Navy Blue Sports in Marty Moore, Jordi Murphy and Nick Timoney, ex-Leinster players who have all been regular starters at Ulster.