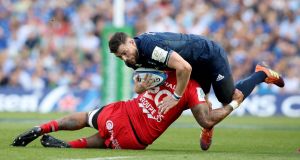 Robbie Henshaw’s return in time for the Toulouse semi-final, and for the European Champions Cup final against English side Saracens is vital for Leinster. Photograph: Getty Images

Familiarity breeds contempt it’s said, but for Saturday’s Heineken Champions Cup final it’s surely more a case of respect. For not the least intriguing aspect of this heavyweight match-up is that Leinster and Saracens were the main suppliers to the Lions tour three years ago, with five players apiece.

That figure would have been six in Saracens’ case but for injury ruling out Billy Vunipola, but all 10 could conceivably renew acquaintances at St James’ Park were Leinster of a mind to include Jack McGrath.

A torn pectoral muscle in Robbie Henshaw’s fourth appearance of that tour, the 31-31 draw with the Hurricanes, ruled him out thereafter, and he was the only one of the 10 not to feature in the series against the All Blacks. George Kruis played in the first Test, while the others – Tadhg Furlong, McGrath, Seán O’Brien, Johnny Sexton, Jamie George, Mako Vunipola, Maro Itoje and Owen Farrell – were ever presents in the three-match series.

Even so, Henshaw trained with Farrell and played outside him in the 23-22 defeat against the Highlanders.

“He’s a similar character to Johnny in terms of how he runs the game and he’s pretty demanding. He’s a good leader so he’s pivotal in Sarries’ attack. He really drives them on in terms of their structure and their game plan.”

Helpfully too, Stuart Lancaster gave English debuts to six of the current Saracens team. “Stuart’s had a good look and he knows these guys from coaching them before so I suppose that’s a good bit of info to have. For us as well, we know how they play from playing them beforehand but definitely we need to take it up another gear this week from Toulouse.”

As for the intriguing match-up between the 33-year-old Sexton and 27-year-old Farrell, Henshaw quipped: ‘I suppose Johnny’s kind of older isn’t he?” before adding: “No, I think they’re two class players. Funny you mentioned the tour in 2017 with the Lions, they were probably the two closest players on that tour. They were always talking tactics and rugby. They were close.”

Henshaw’s strong familial roots in Gaelic football as well as rugby, which saw him play for the Westmeath minors, seems particularly pertinent given the way Saracens hunted high balls in the semi-finals and deliberately sought to deflect balls infield for chasing teammates to contest for the breaking ball.

“Breaking ball, absolutely,” he agreed with a smile. “I haven’t actually mentioned it but I might mention it during the week, ‘breaking ball’. I think the scraps are going to be huge so I suppose beating them to the ball on the floor and those individual battles are going to be key. Getting the edge on your opposite number in the game is going to be huge. If that does happen in the game, whatever team can win those loose balls on the floor will thrive off it.”

David Strettle was Munster’s tormentor in chief, and while Saracens are well capable of varying this tactic, going to the air is invariably a big part of their game, not least given the aerial skills of Liam Williams, Sean Maitland and Alex Goode.

“The wingers do a lot of their individual work with a lot of pressure on them going up for the ball so there will be a lot of that done in our unit block session with the kicking coach,” said Henshaw. “They’d be doing a lot of that individual stuff with someone coming in, pressurising them, trying to get in their face so we’ve done a bit of prep from what we’ve seen.”

Henshaw’s opposite number is likely to be Saracens’ captain and defensive linchpin, Brad Barritt, who went into that semi-final with an ankle injury sustained in their quarter-final win over Glasgow.

“I think he’s pivotal in their defence. He’s probably their defensive leader,” said Henshaw. “I saw him playing against Munster when he was probably on one leg, played 40 minutes and played unbelievably well. It just shows his character as a player and how much of a leader he is in that squad. Definitely, he drives their defensive line-speed and getting the pressure on the opposition.”

Watching Saracens imposing win over Munster, Henshaw said: “We saw a lot. I think physicality was one of the big ones that came off the back of that game. I suppose the gainline, how Sarries played on the gainline, they play with that physical edge with their forwards and then they went to the air a lot.”

Henshaw was an ever present in Leinster’s run to the semi-finals two seasons ago, and again last season save for the quarter-final victory which dethroned Saracens. Sidelined for nine weeks with that troublesome dead leg he sustained in Irish camp before the Scotland game in round two, his return in time for the Toulouse semi-final and now Saturday is vital.

Leinster are going to need every ounce of physicality they can muster for this one.

Hatton roars clear in Abu Dhabi as McIlroy’s game deserts him in the dessert 15:31
Manchester City’s Kevin De Bruyne ruled out for up to six weeks 14:33
Angelo Mathews stands up to England attack as Sri Lanka hold firm 13:09
Conor McGregor feels like he’s ‘only starting’ in UFC career 13:02
TG4 to show matches and highlights from AFLW 12:40
Crossword Get access to over 6,000 interactive crosswords