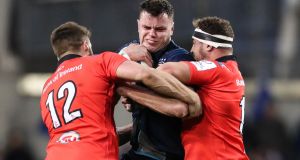 Ryan is always looking to improve the quality of his work.

The sheer unrelenting quantity and quality of his work are matched by few locks in the world game, with his tackle and carrying counts invariably in the high teens or even 20s. He’s very disciplined and rarely turned over. His carries are also an invariably profitable outlet for scrumhalves and hence he makes the hard yards in heavy traffic.

He believes his numbers stack up favourably this season compared to last, although being the perfectionist he is, Ryan is always looking to improve the quality of his work.

Ryan is the great grandson of the long-serving Fianna Fail politician of the same name who, then 24-years-old, was in the middle of the Easter Rising. A founding member of the Irish Volunteers in 1913, Ryan was a qualified doctor and so was spared by the British Army after serving as the medical officer in the GPO.

Jailed in Stafford and Frongoch following the Rising but released soon after, he returned to Ireland to become a minister for Health and Social Welfare in 1947, overseeing the passage of a Health Act despite criticism from the medical profession and the catholic bishops. When Health Minister again in 1951-54 he succeeded in passing another Health Act which considerably expanded the scope of subsidised medical care.

The epitome of a modern-day lock/fourth backrower, Itoje brings huge physicality and athleticism to his game. Indeed, so mobile is he that Itoje can play with equal facility at blindside flanker. Rangier and quicker, Itoje is more likely to be seen galloping in the wider channels than Ryan. He’s also superb at line-out and in the jackal. Ala Ryan, by the age of 22 he had already won everything, and he was also European Player of the Year, by which point Lawrence Dallaglio described him as “a genuinely world-class player already.”

The ex-All Blacks lock Ali Williams forecast then: “He’s going to be a superstar.” Saracens’ defence coach Paul Gustard has said Itoje could be as good as former England captain Martin Johnson.

Itoje was born in Camden, London, the middle child of three to Nigerian parents. He attended Salcombe Preparatory School in Southgate, North London at a primary level, before moving to St George’s School, Harpenden, a state boarding school in Harpenden, Hertfordshire, and later Harrow School.

As a schoolboy, Itoje played several sports including basketball, football, rugby and athletics, representing England at Under-17 level in the shot put. Akin to Ryan, he is studying for a Politics degree at the School of Oriental and African Studies in Bloomsbury, London. “Honestly, I don’t think many of them know who I am,” he once said of his fellow students. “Obviously I’m fairly discreet. I think some lecturers and tutors know, but generally I don’t think they know me. It makes life a little bit easier.”