Naholo will follow the likes of Sean O’Brien, Sekope Kepu and Paddy Jackson to the Exiles 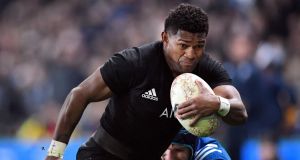 Winger Waisake Naholo will leave New Zealand rugby at the end of the year to join English club London Irish, the All Blacks said on Wednesday.

The 28-year-old, who has scored 16 tries in 26 tests, was part of New Zealand’s victorious World Cup campaign in 2015 and will look to help Steve Hansen’s side in the title defence in Japan this year.

Naholo, who has scored 16 tries in 26 Tests, will follow the likes of Sean O’Brien, Sekope Kepu and Paddy Jackson to the Madejski Stadium.

Naholo, who has regularly shown his deceptive speed and strength to trouble opposing teams, has also won a Super Rugby crown with the Otago Highlanders in 2015 and remains the franchise’s all-time leading try scorer with 41.

“I’m looking forward to the opportunity of playing in the UK but I’m still very much focused on the present and want to work really hard with the Highlanders to ensure we finish our season on a high,” Naholo said in a statement.

“I’m very appreciative of everything the club has done for me and our fans are the best in the world. I also have other goals I’d like to achieve with the All Blacks in 2019, and I know our Highlanders fans will be right behind me all the way.”

Naholo has endured a difficult campaign with the Highlanders this year and has not played since suffering a knee injury in training last month.

But Hansen expects the player to force his way into World Cup contention.

“Waisake is a special member of the All Blacks group. He’s an exciting player who brings an infectious sense of energy and humour to the team environment,” Hansen said.

“While we look forward to seeing him in action in New Zealand in 2019, we wish him well for his future ventures.”