Van Graan stands by decision to kick to touch 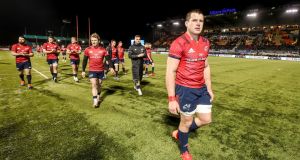 Johann van Graan refused to criticise his players for the on-field decision to turn down a penalty at goal which would have earned them a bonus point in their 15-6 defeat by Saracens at Allianz Park. It is a decision which has left them probably needing to win their final two pool matches away to Racing and at home to the Ospreys to have any chance of again qualifying for the knockout stages of the Heineken Champions Cup.

“You always back the decisions on the pitch,” said Van Graan. “They decided to go to the corner and unfortunately it didn’t work out for us. But there’s a lot of rugby left in this pool, the fact Saracens didn’t get four tries means it’s 17 (Racing), 11 (Munster), 10 (Saracens) if I’m not mistaken. The Paris game becomes a knockout game for us now, we need to go and win in Paris.”

Indeed, bonus point or not, Munster were probably going to need two wins from their final two games anyway in the event of a defeat here, and for all the disruptions suffered in losing Peter O’Mahony before kick-off and three more World Cup internationals during the game - Tadhg Beirne, John Ryan and Andrew Conway.

“It’s disappointing, we came here to win,” said Van Graan. “We were in the game for large parts of it, but unfortunately in the last 20 minutes they were applying pressure in our ‘22 and they went for multiple scrums and scored the try that put us under huge pressure.

“I felt their bench made a big impact and we lost Pete in the warm-up, Tadhg pretty early, John Ryan pretty early - we were quite thin there at the end. It was an incredibly tough game of rugby against the champions in their back yard, but I’m incredibly proud of our guys.”

The extent of O’Mahony’s groin injury was unclear.

“It’s difficult to say. He pulled out, he had started the warm-up pretty well but pulled out with his groin. It’s very frustrating to lose your captain in the warm-up, especially for a game like this. Then to lose Tadhg, your other loose forward, it made the lineout very interesting from our side.

“Well done to Billy Holland for adapting, it was something we went hard at last weekend and we were down two men in the lineout and obviously in the poach threat as well, that’s two of our best poachers. But look, that’s rugby - you’ve got to adapt and I thought the guys that came on did all they could.”

Beirne’s ankle injury and Ryan’s calf injury both looked potentially more serious, but again it was too soon for Van Graan to provide any news. “I haven’t spoken to him (Beirne) but it looks pretty serious. Losing John Ryan, which looks also like a pretty serious calf injury and losing Peter in the warm-up and Andrew Conway to a HIA was tough to take.”

There could be ramification too as a result of the all-in brawl which spilled off the pitch in the 50th minute, and which Saracens believe was caused by something a member of the Munster backroom staff, believed to be team doctor Dr Jamie Kearns said to Jamie George. It also led to a penalty which JJ Hanrahan missed to push Munster 9-3 in front.

“Look I don’t know what happened here, there were a lot of people involved which is never nice to see and we missed the penalty, the score was 6-3 at that stage,” said Van Graan.

“Had we gone to 9-3 it might have given momentum to our side, so we missed that penalty and that’s what I said earlier in the week. To come and win here, only one side has managed it, you need to be at your utmost best and take all of your opportunities and unfortunately we left one or two opportunities out there.”

When it was specifically put to Van Graan that it was something Kearns said, the Munster head coach commented: “I’ve no idea what happened there, I’ll have a look at it but I’m not going to speculate. You never want to see a fight between two teams of this quality.”

It subsequently transpired that Dr Kearns had apologised in person to George and while it was thought both camps are set to move on, Saracens director of rugby Mark McCall intimated that Saracens might lodge a complaint about the comments that provoked the fight.

"We need to decide to what we're going to do before I start speaking about that," McCall said. "From what I know, something pretty bad was said at Jamie. He wouldn't have reacted the way he reacted otherwise. We'll take our time to decide whether we do anything.

"I don't think what was said to Jamie was good at all . . . Owen Farrell got penalised for running into the melee but from what I saw 29 other people ran into it. It was a strange penalty to give and it was instigated by a member of their staff. We'll decide what happens next."