Munster up against it after losing at Saracens 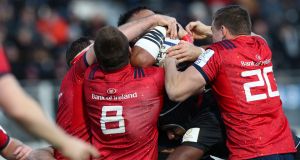 Munster died with their boots on in withstanding the loss of captain Peter O’Mahony just before kick-off and all manner of other blows, yet regrets they’ll have a few in ultimately being overpowered at the death by Saracens deep and rich resources.

They’ll rue a penalty miss by JJ Hanrahan which would have put them 9-3 up nearing the hour after a major bust-up. They’ll also regret declining a penalty that could have secured a losing bonus point near the end.

The net effect leaves them six points adrift of Racing in Pool 4, whom they meet in Paris next up in four weeks time, and one point ahead of Saracens, and thus almost certainly needing something, possibly even a win, in Paris.

Munster suffered all manner of disruption before and during the game, losing O’Mahony in the warm-up and then Tadhg Beirne with what seemed like a potentially serious ankle injury, barely 10 minutes in before John Ryan was forced off soon after.

This was a properly full-on Heineken Champions Cup tie, and both sets of players will assuredly talk of its test-match physicality and intensity. Both defences were superbly organised, offering little or no gaps, virtually impenetrable in a taut, absorbing and tight affair. Yet in the final analysis Munster did not have players with the sheer ballast of Mako and Billy Vunipola, with the former ramping up his efforts to even more telling effect after the aforementioned bust-up between almost all 30 players.

O’Mahony cried off with a groin strain which he picked up in the warm-up. Jack O’Donoghue was promoted to the starting line-up, with Chris Cloete added to the bench. CJ Stander assumed the captaincy.

A predictable exchange of phased attacks ran into brick wall defences, obliging both sides to take to the air, which also rather set the tone for the first half. Mike Haley would have been better served letting Elliot Daly’s tricky low grubber drift over the touchline than inadvertently helping it over the line, thus giving Sarries an attacking throw. With a penalty advantage for offside, Farrell’s crosskick was too flat to Sean Maitland, Haley snaffling the ball from him, before Farrell took the three points.

Beirne’s left ankle twisted awkwardly on the 4G pitch when dragged down by Vincent Koch. The medical staff immediately signalled for a stretcher, and Beirne’s left ankle was immediately placed in a brace for what looked, sadly, like a serious injury. Tommy O’Donnell came on at openside, with O’Donoghue moving to blindside.

From the ensuing scrum, on Munster’s put-in, Ryan appeared to have a really good shunt on Mako Vunipola, and Jamie George was first to pop up, whereupon Pascal Gauzère pinged Munster for whipping the scrum. Munster’s forwards and Conor Murray looked understandably bemused. Farrell turned down the three points this time to kick to the corner, as he did again when Nick Isiekwe was tackled in the air. But the Munster forwards held up the drive for a turnover scrum, with Billy Holland and O’Donoghue enveloping the ball.

An even better defensive set followed from Murray’s deep clearance - with good line speed, ball and all tackles - before James Cronin, with his second nibble, jackalled over the ball for a turnover penalty.

Almost a quarter into the game, Munster had their first attacking sortie, first off a lineout when springing Keith Earls from the maul, and then from a couple of scrums. From Murray’s snipe, the forwards hammered at the Saracens fringe defence through multiple phases - going wide with Rory Scannell’s long pass to Andrew Conway, who was eventually hauled down two feet from the line by Sean Maitland.

Compensation came by way of a penalty for offside, although Sarries were probably the happier to emerge from that spell with the score 3-3, and Munster had been further hit by injuries with the loss of Ryan.

A big carry from Billy Vuniopola, hauled down by Stander, and then his brother Mako, had Saracens back on the front foot, and fullback Max Malins slipped through the tackle of Conway only to be denied by Chris Farrell’s brilliant tackle. Smart play by Earls, when tugging Wigglesworth’s arm to force a knock on, was deemed legal after recourse to the TMO.

Munster had a further reprieve when Farrell surprisingly missed a 40 metre penalty 10 metres to the left of the posts, albeit after Gauzère had ridiculously deemed Murray’s chest-high tackle on Isiekwe illegal. Another Saracens scrum penalty followed, only for Elliot Daly to find touch in goal with his left-footed kick to the corner, giving Munster the scrum on their own 10 metre line.

The defences were by now so on top that each team took to the air regularly, Munster through Murray with the Saracens using their left and right-footed halves, but the full-backs, Malins and Haley, along with their wingers, were solid and secure.

A heavyweight, interesting if hardly thrilling first half ended, almost fittingly, with Munster making 10 metres through their maul to halfway before Murray kicked the ball dead. But considering they’d lost their captain and key lineout man in the warm-up, and two more forwards by the 25th minute, while also on the wrong end of two awful decisions by Monsieur Gauzère, Munster’s had been the more credible effort.

Amid the aerial ping-pong, both sides seemed keener to explore the wide channels after the break and Munster had some joy when Scannell passed long to Earls when he was late tackled after chipping ahead by Ben Earl. It was a marginal call, which mightn’t have been awarded had it not been on the touchline, but in any event Hanrahan confidently kicked Munster ahead.

The momentum and territory were with Munster again when Farrell ripped the ball from Joel Kpoku and then kicked into space, before Malins failed to connect with Maitland in the counter-attack.

When Maitland subsequently brought Munster’s attack to an end by tackling Earls into touch, Saracens’ were at their voluble selves in the ensuing back-slapping. Whereupon Jamie George seemed to take exception to something said by one of the Munster backroom staff, he and Jack O’Donoghue exchanged shoves, Mako Vunipola and Cronin joined in, Isiekwe came in aggressively and suddenly there was an ugly all-in exchange which literally spilled over the advertising hoardings.

Gauzère awarded Munster the penalty, but Hanrahan stroked it wide of the near post, which felt like a big moment.

The temperature and noise levels went up a few notches, and there was renewed energy, and spite, to the ensuing collisions. With Munster again opting to move the ball in midfield, Mako Vunipola drove Stander back in the tackle and ripped the ball from him to put Saracens on the front foot.

Jean Kleyn stole an ensuing lineout, and Haley made a strong carry to halfway, but Mako Vunipola won another turnover by holding Cronin up in the tackle.

Big moments kept coming. Kleyn and Billy Holland were to the fore in holding up Kpoku for a turnover scrum, but the tide turned again when Isiekwe pinched a Niall Scannell throw intended for Stander which was a little short.

Earning a penalty under the posts, Saracens opted for a scrum under the posts rather than draw level, as they did again with further penalties for offside and collapsing a maul.

At the fourth attempt, Munster actually shunted the Saracens scrum back, but still Billy Vunipola picked and fended O’Donoghue, drew in Hanrahan, Rory Scannell and, needlessly, Earls, yet manufactured a one-handed, basketball-style offload for Maitland to finish in the corner despite Stander’s attempted covering tackle. Farrell’s missed conversion from the touchline left it 8-6.

Then Hanrahan’s attempted skip pass to Earls was read, and closed off, by Maitland, for Saracens to up the ante again. Some sharp offloading by Mako Vunipola, Farrell on the wrap, and Malins to Vincent Koch had Munster stretched, and Nick Tompkins stepped Holland. Although Farrell scragged him superbly under the posts, a couple of recycles later the fired up Mako Vunipola plunged over.

Curiously, Munster turned down a three-pointer and bonus point, when going to the corner, and Saracens won the first of three turnovers to keep Munster at arm’s length.