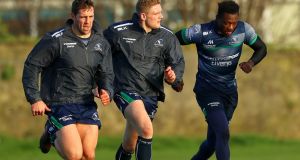 Connacht have taken some much-needed steps this week to alleviate their injury crisis with the recruitment of three players. However, only one of them will be available for the province’s must-win European Champions Cup fixture against Zebre on Saturday in Galway.

Farrell is contracted until the end of the season, as is 23-year-old outhalf Steve Crosby, who comes in after a short-term contract with Munster. However, both Crosby and on-loan Munster prop Peter McCabe are cup-tied and will not be involved against Zebre.

Pat Lam is therefore left with little cover for the outhalf position, and is also stretched in the secondrow and midfield.

Although Ultan Dillane is unavailable for a month, the positive news is that he does not require surgery on a high ankle sprain, but Quinn Roux is being monitored for a groin strain. And with Ben Marshall and Andrew Browne still unavailable, new recruit James Cannon is likely to lead the lineout calls.

Outhalf Jack Carty, having suffered a knee ligament strain in last weekend’s loss to the Ospreys, will not be taking part, but forwards coach Jimmy Duffy said the injury was not as serious as first thought.

“He is making really good progress, but at the moment it is day to day and [we are] managing it,” said Duffy.

Fortunately former outhalf Craig Ronaldson, who has been more regularly used as an inside centre for the past two seasons, has been fully integrated into training and is expected to be available, while captain John Muldoon is set to lead Connacht for his 289th cap. Prop Dominic Robertson McCoy and uncapped fullback Josh Rowland have also returned to training this week after long lay-offs, while new recruit John Andress has also been added to the European squad as frontrow cover.

Duffy said a number of options were now available for the outhalf position. Last weekend scrumhalf Caolan Blade stepped into the role, with fellow number nine John Cooney taking over the kicking duties, but now Ronaldson is reported to be “in good shape and progressing well”, having recovered from a thigh injury against Cardiff last November.

“We are relatively happy with the options available now. Craig is back into full team training. It’s good for Craig, he’s had a tough time, so we are delighted for him to get back into the training routine.”

New recruit Tom Farrell, who is “upskilling on plays and patterns”, may also make his debut.

“First and foremost, he’s a body, but he’s a good player. We have been monitoring him for a couple of years. He brings a number of skills we admire and something we feel we need, so we are delighted to have him involved. He is also available, and is now fully integrating into the squad. We would have confidence in any professional player who comes into the environment to do a job that is required.”

Zebre may be the perfect occasion to blood some new players, but Duffy says Connacht are not taking anything for granted against the Italian side, despite posting a 7-52 victory in Parma in round two.

And with pool two leaders Wasps, Toulouse and Connacht all level on points, Connacht will be looking to post a bonus-point win before heading to Toulouse where their quarter-final hopes will be determined.

“We have massive respect for Zebre, so we are staying focused. As a group we have identified our start, but it is something against Zebre you want to get right. We never take Zebre lightly and never will because from my perspective up front, there are quality players and internationals, including two international tightheads. There are not a lot of weak links in that operation, and then there is [Carlo] Canna at outhalf who is phenomenal player.

“We are treating Zebre as if they are the top side in the competition. We haven’t mentioned the five points, our sole focus is to perform. If we perform, we should be a good position to gain a win and if there is five points on offer, 100 per cent we will go for it. But the main focus is winning the game and respecting the opposition.”