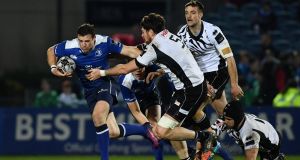 Robbie Henshaw is focused ahead of Leinster’s visit to Northampton this weekend, with victory ensuring a first European Cup quarter-final of his career. Photograph: Ramsey Cardy/Sportsfile via Getty Images

Robbie Henshaw became an unwitting and unwanted focus of attention regarding the dangers of high hits in the modern game when he was caught in the head by New Zealand’s Sam Cane and stretchered off with concussion at the Aviva Stadium in November.

When World Rugby last week sought to reduce the incidents of high tackles to the head with their latest edict, one ventures Cane’s hit on Henshaw was a primary example of what the game’s governing body is seeking to eradicate from the game.

In any event, it comes as no surprise that Henshaw supports World Rugby’s new directive.

That said, like everyone else Henshaw saw inconsistencies over the weekend. “Looking at the games over the weekend, you saw a couple of yellow cards given out quite easily for tackles that wouldn’t have even been penalties in the past. I think every player has to address himself and tackle a little bit lower because you can’t risk 10 minutes in the bin or else your team will suffer.”

Again, in tandem with most others, Henshaw felt the yellow card given to Ulster’s Sean Reidy, which also led to a decisive penalty try for the Scarlets, was a little excessive.

While repeating his support for the new initiative from World Rugby, Henshaw added: “The referee is the main person who decides whether that player goes to the bin. Maybe it was a bit harsh on Sean Reidy. Maybe they might ease off on that a little bit because maybe it was only a penalty. It’s all down to the ref at the end of the day what the decision is. But we’re in control of our actions and we can avoid that by tackling lower.”

Nonetheless, World Rugby probably won’t be too disappointed that their directive has created quite a debate, for their primary intention is to alter player behaviour in the tackle, and in this they are already succeeding, for Henshaw admitted that players have had to address an altered mode of tackling in training.

“Absolutely. You have to practise your body height when you’re dipping late from high to low and showing a different picture. Obviously a lot of my tackles would be quite chest high so I’ll need to work on it a bit myself.”

Looking back on that incident in the Aviva at Leinster’s base in UCD yesterday, Henshaw recalled: “I got a shot from the side and obviously didn’t get to play the Australia game. It was a bit of a disappointment for me not to be able to stay on and play on. I’m back fit now and fresh – good to go for this week.

“I’ve had head knocks before, minor ones, not as serious as that. It was a bit different to what I was used to. Obviously being stretchered off, no one wants to see that. It can be a frightening experience for your family and for yourself as well. But thankfully all is good and I went through all my return-to-play protocols and everything was good.”

Henshaw was also sidelined for Leinster’s ensuing two league games, returning for the back-to-back wins over Northampton. Coupled with his delayed start to his competitive Leinster career due to the knee injury he suffered in the second Test in South Africa, it means that this Friday’s crunch European Champions Cup game against Montpellier will only be his eighth with his new province.

Qualification beckons on Friday, but Henshaw is acutely mindful of the tough afternoon they had in Montpellier when scraping a bonus point in defeat.

“They were tough conditions in that game and I think we let them into it by giving them a few soft penalties, and they got their driving maul moving. They’ve a massive pack, probably the biggest pack I’ve played against, so we need to keep the ball moving and we have to be disciplined. We can’t give them easy penalties. We have to cut down our penalty count.

“Even last week our penalty count needs to be better, but I think we keep the ball moving, keep creating offloads like we did last week and keep running onto the ball and keep playing at tempo and at pace because if we play like that I think they won’t live with us. I think we’ll be able to exploit them, but everyone needs to be on the same page and we need to be able to play with big intensity and a lot of tempo.

“Every player wants to be at the top end of Europe, so our main goal is to get the win on Friday and secure a quarter-final, but we’ve more work to do the week after to secure a home quarter-final. Our sole focus is this Friday night and putting in a good performance and getting to the quarters.”

As to what this would represent to Henshaw, he merely said: “It would mean a lot because I’ve never been in a quarter-final in Europe before in this competition.”