Discipline and smart kicking key against physicality of ‘langueboks’ 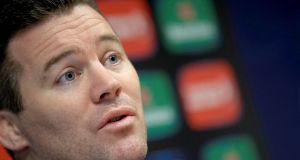 This time a year ago, Leinster were already out of contention in the European Champions Cup, but on Friday they can become the first team to secure qualification for the knockout stages by beating Montpellier at the RDS.

That said, Montpellier probably gave Leinster their toughest hour of the season back in October before Leo Cullen’s side dug deep to not only deny Jake White’s bruising side a bonus point but steal one of their own with the last play.

That two-point swing looks all the more significant now, but Montpellier, five points adrift in Pool Five, know it’s win or bust for their Euro aspirations on Friday evening.

“They are physically very, very big,” said Leinster scrum coach John Fogarty yesterday. “We probably over-carried over there. We got caught held up high in our carry, didn’t get to ground. We couldn’t clean effectively at ruck time. When they turned us over, they are very good at keeping the ball.”

“There was ill-discipline in the first-half. We gave penalties away. They kicked us into corners. You can be in a corner for 15 minutes and you either concede a penalty, in which case you are still in the corner, or else they will score from their maul.”

So South African-infused are Montpellier that that they are known as “les langueboks”. In last weekend’s win over Bordeaux, which elevated them to third in the Top 14, four of their starting line-up and six of their 23-man squad were compatriots of White.

“When you have Jake White, who is an excellent coach, defensively they are very, very good,” said Fogarty. “They have a wall of 13, 14 players at times. You need to find space and you need to kick smartly to them. We didn’t kick very smartly in that away fixture. It is something we need to do well on Friday.”

Re-emphasising the need to get their carrying right and generate tempo, Fogarty added: “That is really, really important for us leading into this game. It is a huge, huge game. The stadium is almost sold out. It is hugely important we get those things right, so that we can put a good performance together. A home quarter is what we want. Winning this game will go a long way towards that.”

Montpellier’s starting team against Bordeaux included just two French players, and their match-day squad just four, which contributes to them not being typically French travellers.

“This myth doesn’t really apply to Montpellier because of the international influence on that team. They’ve travelled well in the Top-14. They’re still in this competition,” warned Fogarty.

Leinster will also be without their in-form, dynamic hooker Sean Cronin for Friday’s game and perhaps for longer, depending on further examination of the hamstring injury he sustained in last Friday’s win over Zebre.

“He’s had an initial scan to show damage. There’s going to be another scan this week and that will tell us a hell of a lot more about term time,” said Fogarty, who admitted to concerns that it could be an extended spell on the sidelines for Cronin. “He looked like he was in a bit of pain, and if they’re in pain like that then it’s not a good sign.”

Against that, Johnny Sexton came through nearly an hour in his comeback against Zebre “with no issues”, while Rob Kearney returned to training yesterday and looks like being available for selection.