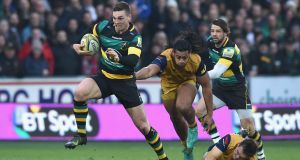 Northampton will not face punishment for letting George North play on despite suffering a suspected head injury. Photograph: Getty/Tony Marshall

World Rugby will not punish Northampton despite ruling that the club’s medics wrongfully let George North return to action after a suspected head injury against Leicester in December.

World Rugby has insisted however that English authorities acted quickly to avoid any repeat of a player returning to action after suffering a suspected concussion.

“Despite the failing by the club to correctly apply World Rugby’s head-injury management protocols, World Rugby has recognised that the RFU (Rugby Football Union) and PRL (Premiership Rugby Limited) acted swiftly and appropriately to implement measures with Northampton Saints and other clubs to reduce the probability of future non-compliance,” read a World Rugby statement.

North appeared to be knocked unconscious after landing heavily from Leicester wing Thompstone’s aerial challenge in the Tigers’ 19-11 league win at Welford Road.

The 24-year-old underwent a Head Injury Assessment (HIA) and returned to the fray, but World Rugby has now confirmed North should have been permanently removed instead.

North was later stood down by Northampton, missing three weeks of action as he recovered from his latest head injury issue.

The Wales wing endured an enforced five-month break in November 2014 owing to a string of nasty concussions.

“The robust head injury protocols defined within the tournament player welfare standards were not fully adhered to at the match in question,” continued the World Rugby statement.

“Prioritisation by the medical staff given to evaluating a potential spinal injury to North was advanced as the principal reason for the non-compliance of head injury protocols.

“Following the incident, the RFU and PRL have communicated with all stakeholders to remind them of their obligations to ensure that immediate and permanent removal is observed in all such cases.

“As part of the review, World Rugby is satisfied that Northampton Saints’ medical staff were educated on the permanent removal process.

“World Rugby recognises the actions taken by the RFU and PRL as appropriate in order to re-emphasise the protocols and are encouraged by the renewed efforts.

“While it is impossible to completely remove the risk of error, World Rugby remains disappointed that there was a failure in this case to identify and manage the injury appropriately, in particular considering North’s medical history.”

City Island to return to hurdles and take on Paisley Park in stayers’ 20:50
McIlroy takes his foot off the pedal and will skip the Honda Classic 20:01
GPA asks delegates to vote against hurling black card at congress 18:33
Dan Tuohy explains ‘rotten to the core’ comments 18:08
Serie A matches to be played behind closed doors due to coronavirus 17:54
Here is your handy guide to sport on television this week