Tadhg Furlong and Leinster prove that year is a long time 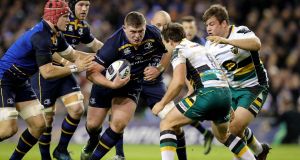 He’s now established as the resident tighthead in the blue of Leinster and green of Ireland, and his performances in the November internationals were such that he is regularly mentioned as a contender to wear the ‘3’ in Lions’ red next summer. Yet it was only this weekend a year ago in Leinster’s penultimate pool match at home to Bath that Furlong was handed his first start in the European Champions Cup.

Leinster had lost their first four games and Leo Cullen and his coaching staff could afford to select a youthful team, which warmed the cockles of the home support with a 25-11 win. Few of the full debutants had benefited from such an investment over time as Furlong, who was in his third campaign and had played 39 games for Leinster, including six off the bench in the Champions Cup.

Indeed, Furlong’s career is a perfect example of patient investment in a hugely talented young player, Joe Schmidt having identified his ability years ago and brought him into the World Cup squad.

“At the time it was probably coming for a while,” Furlong reflected this week of that debut 12 months ago. “I think I’d made six bench appearances and I had a bit of exposure to Champions Cup, so to get the first start was good. At the same time, I was floating in and around Ireland camp for a good little stretch as well.

“Things move fast and especially for a young player. I’ve seen younger lads than myself with a sharper trajectory than I had. You don’t really have time to look back as a professional rugby player. Games come thick and fast and it could be a dangerous game to start looking back and tapping yourself on the back: ‘Oh gee, you did really well in the last year.’ You could forget about the next week doing that.”

After a full season in the Irish squad, Furlong’s first Test start came in the summer against South Africa and now, suddenly, he has quite a body of work under his belt since the corresponding weekend last season.

“I’ve played a fair amount of games for Leinster now. I hit 60 caps at the weekend. That game against Bath was really satisfying for me and the other lads who started their first games as well, even though Europe was very disappointing for us as a team last year; lads I grew up playing with in the system and the academy, so that was a good day. South Africa in the summer, the three Tests where I got a bit of game time and consistently played and prepped three weeks in a row for big games, that was a big learning curve and confidence booster for me.”

Furlong didn’t feature in any of last season’s pool defeats, and having also missed the Montpellier game away this season, Furlong is thus four wins from his four starts, yet he concurs with Garry Ringrose’s opinion that the younger players took last season’s European embarrassment worse.

“Yeah, you have an obligation to the jersey and to make a commitment to it that you will perform as best you can and meet the standards of players that went before you,” said Furlong. “There’s a lot of us without any medals in our back pockets and you look at the senior guys with a lot of them.

“As a younger player you try to pay homage to what the lads have done but, in your own way, move it on a bit as well. For lads to make European debuts last year and then get knocked out in the pool stages with the tradition that the club has does hurt and it definitely feeds the desire for this year.”

Looking back on that campaign, and Leinster’s season in general, Furlong said: “Last year was tough coming back from the World Cup and lads getting thrown straight back into Europe. There wasn’t a massive amount of time in the saddle as a collective unit and it is nearly forgotten that we got to a Pro12 final last year and topped the league.

“The final didn’t go our way but to still get there and for a lot of lads like myself to find out what it is like to play finals rugby was really positive. This year people have used that experience and brought a lot of energy. Stuart [Lancaster] has come in and added great energy as well.”

As for his own upward graph, Furlong said: “I don’t think there has been a massive change in one big facet of the game. It’s just a bit more experience, a bit more match fitness and starting a few more games. Last year there was a time when it was me, Marty [Moore] and Mike Ross and you would nearly start one, sub one and rest one. When you have more involvement in match week you feel that little bit sharper. That time in the saddle is massive and you get more at ease with the whole process of big games and focus more on your own game.”

Now comes another Champions Cup start, Leinster’s and Furlong’s biggest in a couple of seasons.

“It is a big test for us. They are a really well resourced, physical team. We know if we win we have a quarter-final place booked and we top the group. It is a huge test physically. It is a big game for the club, especially with how we went last year.”