Flanker ‘the biggest concern’ ahead of crunch tie in Glasgow, says Rassie Erasmus 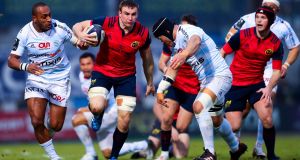 Ireland flanker Tommy O’Donnell is in a race against time to feature in his side’s crucial Champions Cup tie against Glasgow Warriors on Saturday, according to Munster director of rugby Rassie Erasmus.

With both sides vying for top spot in Pool One and Munster ahead of their Scottish opponents by three points in the standings, Erasmus will be eager to turn up at Scotstoun with a full-strength squad.

But 29-year-old Tipperary native O’Donnell limped off in Munster’s inter-provincial victory over Connacht on New Year’s Eve, and after nursing that injury to his left ankle prior to last Saturday’s win over Racing 92, he picked up a different knock on his other ankle at Stade Yves-du-Manoir.

O’Donnell has played 129 times for Munster and, as their most experienced backrow, is a key leader in the pack. Erasmus said on Monday that O’Donnell would probably not be back in time for the game in Scotstoun.

“Tommy O’Donnell is still the biggest concern. I was wrong: it was his other ankle, it is not the same ankle. We will give him until Wednesday,” he said.

“Last week he made it, but this week it is more serious. We only arrived home yesterday, so let’s hope he’s not too serious. I don’t think it’s a long-term thing, but I am sure in this turnaround, from now until Saturday, he won’t make it.

“With the other guys, it’s just normal playing against big French guys you get those bumps. There is one or two I am concerned about, but we will see this afternoon if the guys can cope. They say they are fine, but we will see.”

Munster have won 10 of their past 11 games between the Champions Cup, the Pro12 and a brilliant 27-14 victory over Maori All Blacks at Thomond Park in November.

The team began their impressive run in Limerick when they hammered Glasgow 38-17 one week after former coach Anthony Foley passed away, and if they win the return fixture they are likely to claim a home quarter-final in the Champions Cup.

Off the field, they continue to try and boost their playing ranks, with Irish-qualified Racing 92 scrumhalf James Hart and Grenoble centre Chris Farrell rumoured to be on the brink of joining up for next season. However, Erasmus stopped short of confirming that the duo will be joining the Munster squad for 2017-18.

“It is almost like the Jaco Taute thing. We are talking to a few Irish-qualified guys. Those two [Hart and Farrell] we did talk to, and we are busy with some of them. And even another two guys,” said Erasmus. “But sometimes for a player on that side, just by speculating before anything is done and dusted and definite, sometimes it can ruin a guy’s opportunities there. Definitely not finalised and the moment we get it done, or if it gets done we will make an announcement on Chris and on James.

“I can’t speak for other clubs, but for us it’s more a case of player depth and where you may be struggling a little bit and who is coming through your academy system and experience-wise.

“Seeing how many are away on international duty and do you have enough depth, then you put out, I wouldn’t say scouts, but your own people to help you analyse and make sure the guys will fit into the culture and your plan.

“Obviously we discuss all that with the IRFU as soon as we zoom in on a player, if that’s the right word. It differs from province to province.”