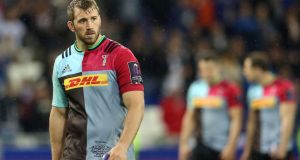 England and Harlequins flanker Chris Robshaw is expected to be out of competitive action for around 12 weeks. Photograph: Adam Davy/PA Wire

Chris Robshaw has been ruled out of the Six Nations after Harlequins confirmed the England flanker will undergo surgery on his injured shoulder on Monday and will be sidelined for 12 weeks.

Robshaw aggravated an existing injury to his left shoulder in Harlequins’ New Year’s Day defeat by Worcester and a meeting with a specialist on Monday confirmed the need for surgery.

Robshaw had hoped to play some part in England’s defence of their Six Nations title but will now be out of action until April in what comes as a major blow for coach Eddie Jones.

The 30-year-old has emerged as a key lieutenant for England since moving to blindside flanker and relinquishing the captaincy last year and has started 12 of the 13 victories under the Australian - missing only the end of season friendly against Wales.

“Chris is a massive ‘glue’ player who does the unseen work,” said Jones, at the two-day training camp in Brighton last week. “He is a really strong, consistent player and is a massive leader for us in an informal sense.”

Jones has hinted that Maro Itoje, who missed England’s autumn campaign with a hand injury, may make the switch to blindside but the head coach has a number of other injury headaches to contend with before beginning the Six Nations at home to France on February 4th.

Robshaw’s Harlequins team-mate Joe Marler withdrew from Saturday’s victory over Sale with a calf injury and is likely to undergo a scan while the Vunipola brothers, Mako and Billy, are absent with knee injuries. Their fellow Saracens forward George Kruis is currently recovering from a fractured cheekbone.

James Haskell, meanwhile, lasted all of 35 seconds in his first appearance since June on Sunday before going off with a head injury and must undergo the return to play protocols, making an appearance in the Champions Cup against Toulouse on Saturday unlikely.

Elliot Daly was also withdrawn from Sunday’s win over Leicester with a head injury and Joe Launchbury is currently nursing a calf strain. Compounding Jones’s problems at forward, Dylan Hartley’s six-week ban will leave him short of game time when France arrive at Twickenham. Guardian News and Media