Connacht aim to rise to challenge and turn positives into points 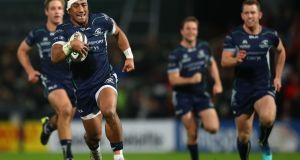 The positivity oozing from Connacht this week needs to be turned into points when European rugby kicks off in the Sportsground this afternoon.

Bar four seasons in the Champions Cup, Connacht have been perpetual Challenge Cup competitors, and today they begin their 19th season in the second-tier competition when Top 14 side Bordeaux-Begles visit for this opening fixture.

Despite their long history, Connacht have yet to win the ultimate prize, but there has never been a better prelude than this season.

After last weekend’s first victory in Ravenhill since 1960, which was quickly followed by long-awaited redevelopment plans for the Sportsground, coach Andy Friend is keen to capitalise.

Seeded second behind Premiership side Sale Sharks, Bordeaux and fellow French side Perpignan complete pool three. While Perpignan are struggling in the Top 14 and are currently bottom of the table, Bordeaux are in a comfortable eighth position, with three wins and a draw from their seven games to date.

Interestingly the two sides have met on one previous occasion – in the 1997/98 competition when Connacht made history in becoming the first Irish province to win on French soil. Warren Gatland was the man in charge when they claimed a hard-fought 15-9 victory in a hostile environment, but it paved the way to the first of 10 quarter-finals and two semi-finals that would follow.

Personnel have changed, but Bordeaux arrive at the College Road venue boasting big, powerful and confident players, and that physicality is something Connacht will need to deal with.

Both coaches have made numerous changes to their sides after the opening rounds of their domestic competitions. Friend has made 10 starting changes. His hand was forced with injuries to Tiernan O’Halloran, Kieran Marmion and Tom Farrell, but in making rotations, Kyle Godwin is named on the wing, and Eoin Griffin partners Bundee Aki in midfield.

Friend says new faces are necessary at this stage of the season. “We are coming off six tough Pro14 games, so it is only natural there is some rotation of the squad, but we have a good blend of youth and experience.

“We have included Conor Fitzgerald and Colm De Buitléar, two promising Academy players, among our replacements. We hope they will get a chance to make their debuts at some stage during the 80 minutes.”

The frontrow trio can expect a tough outing against a French outfit that likes to exploit its physicality. They, too, have made a host of changes from the side that lost away to Grenoble 28-25 last weekend, and are missing several marquee players, including Australians Brock James and Eto Nabuli, New Zealand’s Seta Tamanivalu, and French outhalf Matthieu Jalibert, but have included five internationals, four in the pack.

Friend has made his intentions known to win a trophy this season, and European rugby has always looked a good bet.

Having already made an early stamp on the Pro14, a competition to which he paid little heed until his arrival in the west of Ireland, he does have a greater knowledge of European fare, having coached Harlequins in both Challenge and Champions cups. He was in charge at the Stoop when Quins did the double over Connacht in 2006/7 and played Champions Cup rugby the following season.

“We are really looking forward to our opening game of our Challenge Cup campaign. This is a competition in which Connacht have a proud tradition, and we hope to make a big impact in this season,” Friend says.

“It has been a big week for the club with the announcement of our stadium plans, coming off a good win against Ulster last weekend.

“We know Bordeaux come with a big physical side and we are expecting a massive challenge. But it will be a big occasion in the Sportsground.

Our fans have been huge for us this season and they will be on a high again today I’m sure.”