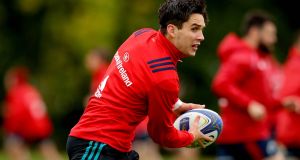 A couple of weeks ago Leinster coach Stuart Lancaster ran through the relative strengths of sides in each of the leagues that supply the Heineken Champions Cup. The Premiership had two clubs and the rest are chasing.

Munster’s opponents today are one of those. Along with Saracens, Exeter’s winning arc is steeper and they have already put distance between themselves and the others.

The Devon club have won six from six opening games and secured five bonus points to top the table ahead of Saracens on points difference. Third-placed Wasps are a further 10 points back.

Everything seems primed for a home win with Munster missing Conor Murray and with Dan Goggin in midfield making his Champions Cup debut. All Blacks scrumhalf Alby Mathewson picking up a knee injury in the Leinster clash at the Aviva Stadium was another devastating injury, Duncan Williams slotting in there with outhalf Joey Carbery.

The home side are heavy favourites with the bookies and are priced at 2/7 with Munster at 11/4 to come away with a win and the draw 20/1.

The Munster backs are clearly lighter than they could be with obvious exceptions in the form of players Kieth Earls and Andrew Conway as well Carbery and former England Saxon Mike Haley at fullback. What team wouldn’t love a Chris Farrell in their centre in this dog fight?

Exeter also have the word legacy in their thinking, which only comes from a club that has been built up organically and largely without the influx of international superstar players from abroad.

But the Munster pack is a strong one with Tommy O’Donnell making way for the arrival of Chris Cloete, who joins Peter O’Mahony and CJ Stander. They are backed up by strength in the secondrow with Jean Kleyn and Tadhg Beirne continuing their partnership and an unchanged frontrow of Dave Kilcoyne, Niall Scannell and Stephen Archer.

There is one unusual doubt hanging over Exeter, more in the mind than anywhere else. Ten months ago they went into a big home European clash with Leinster on the back of playing some sparkling rugby against Bath. But they failed to back it up against the Irish province in the first of their December double-header. Exeter coach Rob Baxter is aware of that kink in their mindset from last season.

“I have said to the players, when they look back to the home game with Leinster last season, we went into that match off the back of a very good performance against Bath – probably our best performance last season in some ways – and we were pretty rampant in that game,” said Baxter this week.

“Then, I think we rolled into the Leinster game thinking ‘we are on form here and we’re going to be fine’ – when actually you need to stop sometimes and get the emotional recharge back into you that you are going to have to go out and battle and fight.”

Following last week’s win over Bath, the sole change from Baxter sees Ian Whitten, the 31-year-old from Lisburn capped for Ireland during the 2009 summer tour, promoted from the bench to partner the gifted Henry Slade in the centre.

Another interesting pick is 34-year-old Gareth Steenson, who schooled with Tommy Bowe in the Royal School Armagh. The outhalf continues to build a career around being told he’s not good enough. He captains the side at outhalf.

Exeter are still without 23-year-old backrow Sam Simmonds, who injured knee ligaments in September and is likely to be out for most of the season. He remains a big loss.

Munster will go at Exeter and crucially challenge them up front. But the home side’s relentless phased play and ruthless scoring should represent a challenge similar in breadth to Leinster last week in Aviva Stadium.