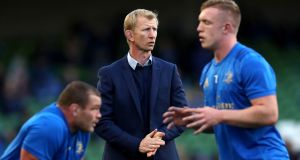 Leinster coach Leo Cullen: “There will be guys disappointed that they’re not going to be involved next week and that is the way we want it.” Photograph: Billy Stickland/Inpho

As much as anything this latest instalment in this auld rivalry was a reminder that Leinster simply remain spoilt for choice. The champions could make 11 changes and not only still win, but also take a huge amount from the game, not least the return to starting action of Jack McGrath, James Ryan, Dan Leavy and Seán O’Brien. The latter two, the in-form Josh van der Flier, Rhys Ruddock, Jack Conan, Max Deegan, Josh Murphy, Caelan Doris . . . go pick that backrow?

“We’re reasonably comfortable,” admitted coach Leo Cullen, “and happy with where we are in terms of we’ve used a good chunk of players and competition within the group is good, so there’s plenty of headaches for us as coaches”.

“There will be guys disappointed that they’re not going to be involved next week and that is the way we want it. So, there are some difficult conversations we need to manage and hopefully that drives the group forward because we have so many big games coming up.”

In a game where the champions were restricted to 32 per cent of the territory and 35 per cent of the possession, Leinster were obliged to make twice as many tackles, 167 to 79, so the return of Ryan and Leavy was timely. Energy undimmed, they only made the 20 tackles apiece, and Devin Toner chipped in with 17, in what was Leinster’s most aggressive and accurate defensive performance of the season, but Cullen accepted that they can’t continue doing this to themselves.

“Having said that, when we played Wasps that day [in 2015], we had 68 per cent possession so sometimes possession can be the worst stat of all to judge the outcome of a game. I remember looking back at that and saying, ‘We had a lot of ball against Wasps but they were the ones running in tries. They’re so dangerous off turn-over ball’.

“But that is not the ideal scenario. It’s not what we want. We need to be able to wear teams down by us playing a multi-phase attacking game. But sometimes that [limited possession] is the way games go and I thought the guys dug in well today. They hung in there well at different stages.”

But that defeat on the opening weekend serves as a warning.

“Yeah, definitely. They’ve got so much pace. The team has changed slightly – I remember George Smith and Piutau were in their side at that time. Jimmy Gopperth is injured at the moment so he won’t be playing. But the pace they have . . . Christian Wade, Elliot Daly, plus the power of guys like Nathan Hughes and Ashley Johnson.

“They have Joe Launchbury, who is a quality international secondrow. [Danny] Cipriani is gone, from when we played them here a couple of years ago, but [Lima] Sopoaga has been added. They’ll be a tough challenge again.”

By contrast, Munster were left to rue another defeat to their old foes despite enjoying so much possession and territory, scoring three tries and were over the line on another three occasions. So what could they have done better?

“Improve our discipline,” admitted Johann van Graan, perhaps with the penalty against Stephen Archer for blatantly blocking Fergus McFadden to give Leinster a two-game buffer. “And convert our try-scoring opportunities that we created. That’s why we’re actually so happy and excited about our attack. I think it was out there for all to see, even away from home, to come up with that and to actually test the opposition. They scrambled really well, and they’re a quality outfit, so maybe score one or two more tries and finish one of those opportunities.”

Reflecting on how much time was eaten in the procession of scrums and penalties which preceded the Alby Mathewson try, van Graan said: “For us it’s about our improvement and I said from day one that it’s a long season, and we’re very disappointed to lose tonight but very excited about the future.”

Most eyes would have been on Joey Carbery. The former Leinster man was particularly impressive in the first-half spell when Munster trimmed the home lead from 14-0 to 14-12, jinking out of trouble in his own 22, then directing the Munster attack left and right before kicking sweetly to the corner.

“Sometimes you forget that he’s only 22 and he’s settling into playing 10 consistently,” said van Graan. “But he’s just taken it into his stride and so have the team. We’ve got really big competition in that ‘10’ spot and he knows that as well, but this week he was all the same; nothing different this week to the previous weeks.

“He’s so calm, he takes us forward and like I said he’s very clear and concise in his decision making and he has slotted in really well. He came into Munster and he fitted in, and I’m really glad to have him.”

Van Graan was adamant Munster can beat Exeter in their Sandy Park fortress, and with Carbery at outhalf. “Oh most definitely we can. That’s why we got him, because I believe he is going to be a world-class player.”

“We’ll reassess as coaches over the weekend and get our plans in place for Exeter. The brilliant thing is that there is a brand new competition starting on Monday,

“We have a massive challenge. Not a lot of teams have gone down there and got a win. I found out last year that in these six games you need to approach each one as a knock-out game and we’ll do that accordingly. It’s certainly a game that we’re very excited about. We haven’t put a lot of time into it in a team environment because we gave Leinster all the respect that they deserve. We as coaches have been working away on them, and we know that it’s a going to be a massive challenge and that at the end of January they’ve got to come to Thomond Park so, there’s great excitement there.”