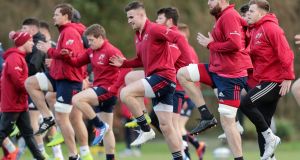 Munster’s chances of reaching the knockout stages are improbable, but just about possible. Photograph: Laszlo Geczo/Inpho

The 2020 Six Nations Championship is creeping ever close, and with it the dawn of a new era for Irish rugby. But before Ireland can take centre stage, the provinces have some business to take care of on the continent first.

This weekend sees the final round of pool fixtures in this season’s Champions Cup, and three of the four Irish sides could still be involved come the knockout stages in April.

Connacht have fallen by the wayside - their memorable campaign coming to an early end at the hands of the mighty Stade Toulousain in Galway last Saturday.

Leinster - unbeaten on all fronts this term - have swanned into the quarter-finals with the efficiency of champions elect. Ulster have a very good chance of joining them, while Munster are firmly on the ropes.

There is still plenty to be settled with one round of fixtures still to play - here is everything you need to know as the pool stages reach their conclusion.

The final round of the Champions Cup pool stages, with the make-up of the quarter-finals to be decided.

The remaining pool fixtures will be played on the Saturday 18th and Sunday 19th of January.

All of the games are being shown live on BT Sport, while Harlequins against Clermont Auvergne is being broadcast free-to-air by Channel 4 and Virgin Media. You can also follow the fortunes of Ulster on The Irish Times liveblog on Saturday afternoon.

Who needs what to qualify?

As mentioned, Leinster are already through to the quarter-finals while Connacht are playing for pride when they take on Montpellier in France on Sunday. Ulster are in a good position while Munster have a mountain to climb. Here is a look at the state of play in each pool ahead of the weekend:

Leinster are the runaway leaders in pool one, having won all five of their matches, picking up four bonus points along the way. They are currently the top seeded side in the competition on 24 points and have the best points difference of any side (+105). Their place in the quarter-finals is guaranteed, but a home quarter-final isn’t - it’s unlikely, but they could still be overtaken by the four sides below them - Racing 92, Exeter, Toulouse and Clermont.

Leo Cullen’s side travel to play Benetton Treviso in their final pool fixture and a victory of any description will guarantee their status as top seeds, meaning a home quarter-final and potential home semi-final. If they lose but pick up two bonus points they would also secure a home quarter-final. Elsewhere in the pool, only Northampton Saints are still alive. They can reach 19 points with a bonus-point win away to Lyon, however their inferior points difference means they are likely to need one of Ulster, Saracens or Gloucester to lose in order to progress.

Exeter are top dogs in pool two and are guaranteed a place in the quarter-finals after their 31-31 draw away to Glasgow at the weekend. They still have plenty to play for however and victory over La Rochelle at Sandy Park at the weekend will ensure they have a home quarter-final.

The Chiefs are currently third seeds (22 points, +62), and can still gain a top two seeding if they better Racing 92’s result against Saracens by 10 points. Elsewhere in the pool, Glasgow Warriors are still alive but only just - if they win away to Sale Sharks with a bonus point, and Northampton and Gloucester are both beaten in France, then they would squeeze into the top eight.

Ulster’s winning run in Europe came to an end last Saturday as they were beaten 29-13 by Clermont Auvergne in France, with the province left to rue their first-half profligacy. However, their destiny remains in their own hands and a victory at home against Bath this weekend would guarantee a place in the last eight.

A home quarter-final looks out of their grasp though - they would need Clermont to lose away to Harlequins in order to top the pool and also require Gloucester to beat Toulouse in France, as well as a huge points swing with the French giants. Lose to Bath in Belfast and Ulster can still qualify, depending on the results of those below them. Clermont, meanwhile, are in control of the pool and are pushing for a home quarter-final - if they beat Harlequins with a bonus point they could still leapfrog any of the four sides above them should they lose at the weekend.

Munster aren’t out of Europe just yet but their challenge is on life support after Sunday’s 39-22 defeat to Racing 92 in Paris. They are currently third in the pool and need Racing 92 to beat Saracens at the weekend in order to finish as runners-up. A bonus-point win over the Ospreys at Thomond Park would move them up to 16 points overall - enough for them to qualify providing Glasgow, Northampton and Gloucester all fail to win.

It’s improbable, but just about possible. Defending champions Saracens will progress if they beat Racing 92 at Allianz Park, while the French side - current second seeds - know a victory will probably be enough to secure home ties in the last eight and the last four.

Connacht’s European odyssey is over for another year. They produced two fine performances to beat Montpellier and Gloucester at home but last Saturday’s 21-7 defeat to Toulouse in Galway signalled the end of their campaign. Toulouse currently top the pool on 22 points and know a home victory against Gloucester this weekend will guarantee a home quarter-final, while potentially earn them top-two seeding. The Cherry and Whites know an improbable victory at the Stade Ernest-Wallon will secure a place in the knockout stages.

All four matchday squads will be available here at 12pm on Friday January 17th.

There are limited tickets available for Ulster’s crunch clash with Bath, which are available HERE.

And there also limited tickets available for Munster against the Ospreys at Thomond Park, which you can buy HERE.

And what about to lift the trophy?

How long until the Pro14 starts up again?