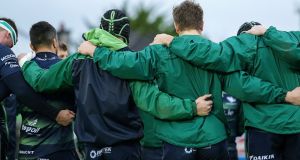 Connacht head coach Andy Friend has recalled a host of Irish internationals for Saturday’s crucial Champions Cup clash with Toulouse at the Sportsground (kick-off at 3.15pm).

Jack Carty and Bundee Aki are named at outhalf and outside-centre respectively after sitting out the last two weeks, while there are also returns to the starting team for fellow internationals Finlay Bealham, Ultan Dillane and Matt Healy.

There’s further good news in the backrow where Jarrad Butler and Colby Fainga’a have both recovered from injury, with Butler captaining the side at number eight and Fainga’a joined by Paul Boyle on the flanks.

Dillane will be partnered by Gavin Thornbury in the secondrow, while Paddy McAllister and Tom McCartney join Bealham in the front row to complete the pack.

Scrumhalf Stephen Kerins is handed his first Champions Cup start, with Caolin Blade among the replacements having started the last nine games for Connacht.

Bundee Aki is partnered by Peter Robb in the centre, while Healy is joined by winger Niyi Adeolokun and fullback Tiernan O’Halloran in the back three.

“It’s been a difficult Christmas period for everyone, but we’ve a lot of returning players which is exactly what we need. With our captain Jarrad Butler back in the side and players like Jack and Bundee returning from their break, I believe this is a squad full of quality and experience that can win this game.

“This game is exactly what we need. We’ve got a great opportunity to come up against the French champions and challenge them in our own backyard. We know it’s a must-win tie to keep our quarter-final hopes alive, and with our home crowd behind us I know the players will relish the occasion.”

1 Ireland backrow of O’Mahony, Van der Flier and Stander to be retained against England
2 Triple bogey costs Rory McIlroy as Adam Scott prevails at Riviera
3 Winning Triple Crowns: ‘Seeing Jack Kyle was a spiritual experience’
4 Gambling advertising in sport: How much is too much?
5 On healing and wild hurling: The re-education of Diarmuid Lyng
Real news has value SUBSCRIBE