Luke McGrath injury is blight on another perfect weekend

Four Irish provinces on top of their European pools, although all still need one more win to make sure of qualification 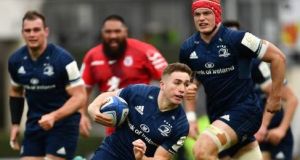 Another perfect four from four leaves the quartet of Irish provinces on course for European qualification, although all are still in need of one more win to make sure.

For all four to secure places in the knockout stages would be a first, and a huge fillip before England come calling on the opening weekend of the Six Nations on February 2nd.

However, with the latter also in mind the Irish four-timer came at a cost, most notably at the RDS where Leinster emphatically avenged October’s defeat by the other four-time winners Toulouse with a 29-13 bonus point victory.

The extent of Luke McGrath’s injury will be confirmed by Leinster this week but the scrumhalf is understood to have sustained a knee ligament injury which is liable to rule him out of Leinster’s final pool game against Wasps next Sunday and at least the start of the Six Nations.

Kieran Marmion, who started the November wins over Argentina and the All Blacks, has been sidelined since then after undergoing an ankle operation, and is due back around the week of the England game.

John Cooney also pulled out of Ulster’s 26-22 win over Racing 92 at the Kingspan Stadium due to back spasms, but he is expected to return for Ulster’s game away to Leicester next Saturday. As things stand he may be the only established Irish squad member to act as back-up to Conor Murray.

It is particularly hard on McGrath, who was an unused sub in the opening win of last season’s Grand Slam away to France, and missed the remainder of the campaign through injury.

“It would be a cruel blow for him, but we’ll see how it unfolds,” said Leinster coach Leo Cullen. “We’ll get him assessed. I’m only speculating really at his stage. We’ll get him scanned at the start of the week, and make a plan from there.”

McGrath’s likely absence will have an immediate ripple effect on Leinster, with Jamison Gibson-Park in line to start against Wasps, which in turn would mean no place for Scott Fardy or James Lowe due to the rules limiting teams to two “non-EU” players.

Lowe will be available after suspension, and Leinster could also welcome back Rob Kearney, Robbie Henshaw and Dan Leavy, and possibly Sean O’Brien. Although there are no guarantees, as Jack McGrath’s surprising exclusion from the ‘23’ for the Toulouse game demonstrates. The odds are that Leinster will again be without Johnny Sexton.

Joe Schmidt would like to see his backrow options boosted given Munster’s equally emphatic 41-15, bonus point win away to Gloucester on Friday night was also tarnished by the “popped rib” which Peter O’Mahony suffered.

Munster will give an update on their captain on Monday, but O’Mahony must be considered doubtful for both their epic grand pool finale against Exeter at Thomond Park on Saturday (kick-off 5.30pm) and the English game.

Exeter set up a potentially epic pool decider – one of three next weekend – by dint of their bonus point win over Castres on Sunday. Munster lead Pool Two by four points, and having drawn on the opening weekend Exeter know that a win by more than seven points, provided they don’t concede four tries, would see them top the pool and qualify.

For their part, a bonus point defeat would be sufficient for Munster to qualify provided they did not concede four tries. Currently ranked fifth of the pool leaders, more pertinently a win could secure a home quarter-final if one of their other current pool leaders were to slip up.

“Exeter at home, it’s a team that I respect so much,” said Munster coach Johann van Graan. “I’ve said it before, the way they play and conduct themselves, it’s a fantastic club. What better way to set things up than Munster v Exeter at our home ground, already sold out?”

“We’ve played them before. It was a gale force wind on that day with two different halves – one of defence and one of attack. I think this will be a totally different game at Thomond.”

Pool One is the last to be completed next weekend, and come Sunday Leinster may have qualified depending on results beforehand. Leinster suffered their heaviest European defeat, 51-10, against Wasps in the corresponding game three years ago. However, as things stand victory over Wasps would not only secure qualification but a home quarter-final as well regardless of results elsewhere.

“It was always going to be a huge game, and we were nervous literally since that game because we knew that was coming,” said Cullen in the aftermath of the win over Toulouse.

“Now we’re going to be nervous because it’s another huge game against Wasps. The job’s not done, people will talk ‘oh great performance,’ etc etc...but the job’s not done. So we’ve a hell of a lot of work to do to get to where we want to be, which is top of our pool, then try and get as decent a seeding as you can, ‘cos you’re not only competing against your own pool, but other pools too, that’s an unusual dynamic.”

Saracens remain the tournament’s only unbeaten team after Sunday’s bonus point win away to Lyon, and thus the only team to have ensured qualification so far at the very least as one of the three best runners-up.

Leinster would need them or Pool Four leaders Racing (at home to the Scarlets) to slip up next weekend to earn a top two ranking, and with it the carrot of home country advantage in the semi-finals, with Saracens at home to Glasgow next Saturday in one of three pool deciders.

Ulster’s 26-22 win over Racing leaves them well placed to advance too, although they would need Racing to lose at home to the Scarlets in order to advance as pool winners. However, a win away to Leicester on Saturday would be enough to secure one of the three best runners-up spots.

“We have put things back in our control and that is how we are looking at it,” said Ulster coach Dan McFarland. “Look, playing Racing 92 at Kingspan Stadium – what an experience. Playing Leicester at Welford Road, what an experience.

“Even on itself, forget about the table, what a great place to go and try and win in a tight game of European Rugby. Is it going to be tough? Of course it is. They are playing some very good rugby as we know, so we will look forward to that.”

Sale still lead Connacht in their Challenge Cup pool on the head-to-head records despite the latter’s 20-18 win at the Sportsground on Saturday. However, a win away to Begles-Bordeaux next Saturday afternoon would see Connacht advance as one of the best runners-up at the very least.