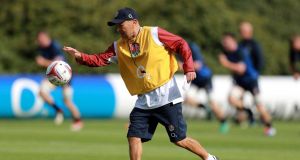 Tom Curry and Sam Underhill will line up either side of Billy Vunipola in a new-look, highly mobile backrow against Ireland on Saturday as England coach Eddie Jones continues to juggle his resources in the team’s penultimate World Cup warm-up match.

Curry and Underhill, who have both been hard hit by injury, bring a dynamic dimension to the flanks, where Jones still seems some way from settling on his preferred combination.

Captain Owen Farrell plays his first game of the warm-up series but at inside centre, alongside Manu Tuilagi, with George Ford at outhalf.

Jonny May also makes his first appearance this season on the left wing with Joe Cokanasiga switching to the right and Elliot Daly remaining at fullback.

Prop Mako Vunipola, who has not played since suffering a serious hamstring injury in May, is on the bench.

“We purposefully made the week short looking ahead to the World Cup where this might happen beyond our control,” Jones said.

“It is the third of four games for us and come the 8th of September, when we get on the plane, we want to be ready to go. This is another step forward for us.”

England beat Wales at Twickenham but then lost the return match in Cardiff last week. After the Ireland game they complete their preparations against Italy on September 6th.

“This weekend we will be looking to gain more game fitness and testing different sorts of game strategies. We have a specific way of how we want to play and the focus is very much on ourselves,” he said.

There was no place in the squad for uncapped Bath winger Ruaridh McConnochie, who had to withdraw from both Wales games with late injuries.