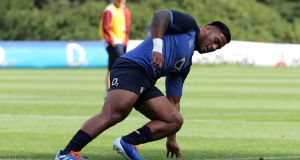 Manu Tuilagi has revealed how he could have avoided more than a year of his injury layoff if he had come clean regarding his initial groin problem, describing the lengths he went to in order to hide it.

The England player admitted he kept the injury quiet for five matches in 2014, spending 15 months out of action as a result. It took the help of a psychologist to ensure he opened up about subsequent fitness problems.

Tuilagi’s revelation is alarming but he is not the first England regular to highlight how players hide injuries. Last year, Billy Vunipola claimed he has done so at least 10 times and that rugby union was “almost in NFL territory” as regards fitness problems being kept quiet for fear of losing contracts.

At the start of the 2014-15 season Tuilagi’s injury list was long enough but hiding a pulled adductor muscle until “there was a loud pop” against Ulster set in motion years of fitness problems for the centre.

It is widely accepted Tuilagi missed the 2015 World Cup after admitting to assaulting two police officers but he would not have been selected because of his groin injury. Hamstring and knee problems followed his return before his groin flared again in 2017 and it took until February this year for Tuilagi to make his first England start since 2014.

“It was stupid,” he said. “It was the start of the season in 2014. I did it on the Thursday, played on the Saturday and strapped it up. It went higher and higher into my groin. At one stage I started strapping my pubis. The physio was like: ‘What are you doing?’ I said: ‘Er, nothing’. In the fifth game I got the ball in the first 20 minutes, went to accelerate and bang, there was a loud pop and I just couldn’t walk. I had pretty much dislocated my pubic bone.

“I guess I wasn’t honest with the physios, but also I didn’t really know what it was. I didn’t tell them. I would say: ‘It is a bit sore.’ It got to that point where you are running and trying to just take the pain. I used to put a padding around my pubis, trying to keep it together.”

Tuilagi is now injury-free and set to feature in his ninth consecutive England Test against Ireland on Saturday, eight years after announcing himself on to the international stage with a blockbusting performance in Dublin on his second cap, also in a World Cup warmup match, effectively booking his place at the 2011 tournament.

Asked what advice he might have now for his younger self, Tuilagi said: “To look after your body a bit more and listen to it, don’t force it, because that is how it all started for me. You just think: ‘I am never going to get injured.’ Even if it hurts you think ‘I will be all right.’ That is a lesson.”

It is a lesson Tuilagi learned after spending time with Matt Thombs, a sports psychologist used by his club, Leicester, and the 28-year-old has been offering advice to his teammate Ruaridh McConnochie, who has been denied his England debut two weeks running owing to niggling injuries. “I have about half an hour with [MATT]just speaking to him about how you get your body ready and rugby in general. With injuries you have to be honest, because if you’re not honest with the physio they don’t know how to treat you.”

Tuilagi said he often wonders how differently his career might have panned out had he not kept his groin injury hidden. But he adopts a philosophical tone when insisting he has no regrets because “whatever happened there has got me here now”. As far as he is concerned, however, honesty is the best policy.

“You don’t want to miss out on playing but then you miss out more when you don’t deal with it. It might seem worse at the time but if you do it then you can come back quicker. If you hide it three or four times, maybe longer, you are out. You can take the pain but if you physically can’t do it, not because of the pain, but because your body mechanically can’t do it.”

Whether Tuilagi starts on Saturday is likely to depend if Jones pairs George Ford and Owen Farrell as England’s 10-12 axis for the first time since June 2018, having hinted at playing a more expansive game last week. Mark Wilson, Sam Underhill and Tom Curry are pressing for inclusion, while Jonny May is also in line for his first appearance of the World Cup warmup games.

Meanwhile, World Rugby has hastily passed a law amendment that would have denied Wales their decisive try against England on Sunday. George North scored while England were down to 13 men, with Anthony Watson in the sin-bin, Willi Heinz off the field for a head injury assessment and Ben Youngs having not yet received permission to replace him.

After Wales’s 13-6 win, which put Warren Gatland’s side top of the world rankings, Eddie Jones joked that the referee, Pascal Gauzere deserved a yellow card for allowing play to restart. In fact the relevant law stated that it was the referee’s discretion as to when to restart the match but the amendment issued on Wednesday now states that for HIAs and blood injuries, the departing player must be replaced before play resumes.

1 Connell losing touch with the club championship is the real tragedy of Normal People
2 Ghosts and goalposts: The soul of street football in Dublin’s Gloucester Diamond
3 Gerry Thornley: Coronavirus crisis could be terminal for Ireland's rugby clubs
4 Shane Ryan: Shark attacks and gruelling shifts on a Covid-free Atlantic mission
5 Coming fourth in the Olympics didn’t change this fearless quartet, time did
Real news has value SUBSCRIBE