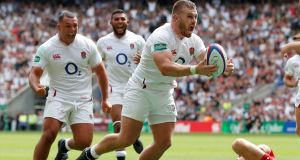 This was supposed to be Wales’ big moment, a chance to knock New Zealand off their decade-long perch at the top of the World Rugby rankings. Instead a shirt-sleeved August crowd saw a powerful home win which will fuel that time-honoured English emotion, premature optimism. There is still more than a month before the World Cup kicks off, as both coaches were quick to stress afterwards.

That said, there was sufficient strength and energy on display from Eddie Jones’s players to send them skipping down the M4 to Bristol where the final 31-man squad is due to be confirmed at lunchtime on Monday. Warren Gatland’s Wales will head westward in more contemplative mood, having lost for the first time in 15 Tests and missed the opportunity, for now, to overhaul the All Blacks.

The reality is that neither of these two sides is yet in a position to make grandiose claims on the subject of world domination but England’s directness, scrum supremacy and power out wide were conspicuous enough to send an equally blunt message to the southern hemisphere. They will be big, fit and strong in Japan and a potential threat to anyone if they can bring the decision-making and consistent execution to match.

When Joe Cokanasiga, Billy Vunipola, Manu Tuilagi and a revved-up Ellis Genge are in full cry there is certainly no shortage of front-foot muscle and Northampton’s Lewis Ludlam, who played almost as hard as he sang the national anthem, could not have done much more to press for a seat on the plane.

Had the all-action Tom Curry not departed prematurely with a sore AC joint, Wales might have found it harder to launch the second-half comeback which dragged them back from 21-7 down. Without the class and defensive valour of Jonathan Davies and Liam Williams it could have become a long old afternoon.

It will be interesting to see how they respond this coming Saturday in the reverse fixture in Cardiff, when Gatland plans to employ largely the same starting XV. As Alun Wyn Jones wryly noted afterwards they also started this season’s Six Nations slowly but “did pretty well in the end”. Either way, the result of a scan on Gareth Anscombe’s injured knee will be keenly awaited, the Welsh outhalf having ended the day on crutches.

Rather more pivotal encounters await in Japan but there was an edge to this supposed warm-up from the outset, England’s impressive early close-range power earning them a 14-0 lead through converted tries from Billy Vunipola and Joe Cokanasiga.

Wales needed a spark and were duly blessed with an outstanding individual try from their scrumhalf Gareth Davies, who spotted space down the blindside off a scrum and swerved past Elliot Daly for a wonderful 40-metre solo score. It was Davies who scored the crucial try in their 2015 World Cup pool win over England on this ground and his highlights reel grows ever more eye-catching.

At no stage, however, were Wales able to relax in the set pieces and England’s third try was a gift. Ken Owens’s decision to opt for a long throw close to his own line with half-time looming was an interesting gambit which backfired spectacularly when the ball soared over Alun Wyn Jones and Luke Cowan-Dickie hurtled over for his first England try.

A 21-7 interval lead was due reward for England’s extra urgency and attacking intensity but Wales were not finished, surging back into contention with tries from George North and replacement prop Wyn Jones after the hosts had replaced their debutant scrumhalf Willi Heinz. While the Gloucester man is a smart tactician, which England clearly like, there have been quicker 9s at the highest level.

Three George Ford penalties, and a late opportunist Daly drop goal clinched a morale-boosting win for Jones’s side, who had four locks on the field at one stage in the second half.

Vunipola was a purposeful presence, Cokanasiga was a consistent handful on the left wing and, along with Ludlum and Heinz, both Jack Singleton and Joe Marchant earned precious first caps off the bench. It brings to 70 the number of players capped by Jones since early 2016, with no fewer than 129 having been called up to train with the squad.

The trick now is to distill those various hunches down to the optimum 31-man blend, capable of mixing it with anyone in Japan. Knowing Jones there may yet be a selectorial sting in the tale but, style-wise, we already know his 31 chosen men will not be a shy, retiring bunch. – Guardian

J Singleton for Launchbury, J Marchant for Joseph (both 79). Not used: J Marler.

Leinster find a performance right up with their best to see off champions Exeter 20:19
Ireland make loud statement of intent as they crush Wales in Cardiff 19:48
Kieran Dowell goal moves Norwich within two points of return to Premier League 18:50
Rachael Blackmore caps historic season as Minella Times wins Grand National 19:08
Jürgen Klopp says Trent Alexander-Arnold has nothing to prove 18:26
Crossword Get access to over 6,000 interactive crosswords