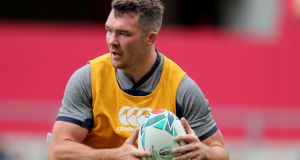 Peter O’Mahony: the Ireland forward played an Under-20 World Cup in Japan some years ago. Photograph: Dan Sheridan/Inpho

Peter O’Mahony stretches the corner of his mouth on one side thinking of the recent bloc of physical training the Irish team has been doing. It is not quite a wince but the sense is he is relieved it has passed, consoled that a tough body of work has been completed and as animated as he ever is about stepping on the plane today for a stint of warm weather training in Portugal.

It could seem like a cruel joke on the Irish summer that the Ireland team are leaving it behind for proper warmth. Still, O’Mahony knows that while Quinta do Lago won’t have the humidity of Japan, there is more to a week in the sun than the smouldering heat of an intense pre-season schedule.

“I don’t know whether it’s I’m getting older or it’s getting harder but it was just, I thought it was difficult,” says the 29-year-old. “I wouldn’t be one for long-distance running and there was a bit of that there and I was blowing up left, right and centre.”

Long distance running for a 107kg forward is a couple of hundred metres.

“We’ve focused on lots of different things from day one to now where we’re doing lots of different stuff. Our focus has been across the board, again very scientific stuff. It’s been hard, those dark times, you stand together afterwards and it’s a great buzz. Guys who are there still have come out the other side of it fitter and stronger than ever. Bar the rotten fitness session and horrible gym sessions, it’s been great.”

There is a sense from O’Mahony that he has seen this before. There is no fear about any of the names that come up in teams that Ireland may face. He’s like a steady hand, certain and sure of what lane the squad occupies. But today the standing joke is that, ambassadors both, O’Mahony is Marks and Spencer to Paul O’Connell’s Aldi.

At least it forces a smile. He will be pleased if his career shelf-life is as long as that of the former Munster team-mate who retired in 2016 at 36 following a serious hamstring injury. O’Mahony will be 30 years old next month just before the World Cup begins.

Years ago he played an Under-20 World Cup in Japan, while the Ireland team went on tour there two summers ago. There is significant collective intelligence about the country, enough for the team to understand what they will face culturally and physically without undue fear.

“Yeah they’ve definitely referenced that tour [two years ago] a fair bit, just how they dealt with the different factors other there – heat, food, hydration, all those type of things have been planned and planned,” he says.

“There won’t have been a rock unturned. They’ve gone through everything with a fine-tooth comb. It’s certainly going to be more difficult. I actually had my Under-20 World Cup in Japan. It wasn’t the same time of the year but it was difficult. But again, it’s a level playing field because everyone has to do it.”

It is too early for O’Mahony to fret, too soon to start picking off teams or worrying about scores in the Rugby Championship even if they do suggest a shift in the world order.

Still Australia beating New Zealand 47-26 with South Africa winning the championship outright is not passing him by, although he understands the rugby earth could tilt back on its normal axis by the end of September, when the World Cup begins.

He rejects any notion of Ireland, who won’t play any of the southern hemisphere teams prior to Japan, going into the competition undercooked.

“Yeah look,” he says, “obviously we played Italy at the weekend, we now have England and Wales”.

It’s not like we’re going in with three or four handy ones. We’re going into arguably two of the teams who are going to be competing for this competition.

“You look past either one of them and you’re staring down the barrel of 40-50 points. They’re that good. Obviously Wales are Grand Slam champions, they’d the chance to go to number one, best team in the world, and England – you saw the squad they picked, they’re a seriously impressive side.

“I’ve heard a bit of this rumour that, you know, we’ll be undercooked. But they’re three serious games that we have coming up, England being the first one.”

Ireland will meet New Zealand or South Africa in the knockout phase if Schmidt’s side end up first or second in the pool. Ireland may have had the easiest group but it’s a wicked cross over against two sides with five World Cups won between them.

Still, that’s rushing headlong forward. He talks of injuries to Joey Carbery, Gareth Anscombe and Toby Faletau, his own injury in the last World Cup against France, which forced him home. Even for a reliable performer like the Irish flanker, nothing is certain.

“I really enjoyed being coached by Rassie,” he says. “He’s a very particular, certain style. It doesn’t really shock me that he’s done what he’s done.

“I had first-hand dealings with Jacques [Nienaber], their defence coach. I think their defence was probably the most outstanding thing of their performance over the series. I’m not surprised at that either. It’s an effective system that’s gone very well.”