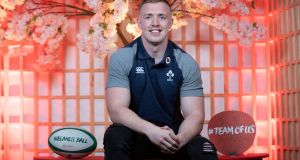 Dan Leavy at Vodafone’s “Ireland’s Ball” launch event in Ukiyo-e. ““The physical side, the pain’s nothing. All the chat’s about the World Cup and that’s pretty hard to deal with sometimes.”

Dan Leavy says he was “humbled” by the support and thoughtfulness shown to him following the horrific knee injury he suffered while playing for Leinster in last season’s Heineken Champions Cup quarter-final against Ulster at the Aviva Stadium.

Among those to get in contact were Connacht flanker Eoghan Masterson, Mayo footballer Tom Parsons and Republic of Ireland midfielder David Meyler, all of whom had sustained and subsequently recovered from severe injuries.

The 25 year-old Leavy underwent a number of surgeries in London that included repairing his anterior and posterior cruciate ligaments. It’s a rehab process that may take over a year.

Speaking at the launch of Vodafone’s ‘Ireland’s Ball, ’ he offered an insight into the days and months after sustaining the damage.

“I had to wait a month before I could do anything, just chilling on my couch and couldn’t bend the knee that much. By the time the Toulouse game came around, I was able to walk which was pretty unusual for an injury like that. It was a positive sign.”

He had to wait a month before undergoing his first surgery, was on the couch for another month and then got a first crack at rehab.

“I made a lot of headway, did three months [worth of work] between my first op and second op. I made serious strides, came on leaps and bounds and then I went in five weeks ago today for my second batch of surgeries and the surgeons are delighted with it.

“I’m not going to rush it but I’m probably a little bit ahead at the moment. By the time I was going into the second surgery, I was really shocked with how good my knee looked. Apart from the scars, it looked like a normal knee again. I put a lot of muscle back onto my leg and it was feeling really, really good.

“Everyone has said the surgeries went really well. Even in the window between my first and second surgery, I felt great. My knee felt great. I have full faith that I will back.”

There was talk that he might spend some time in the USA potentially with an American NFL club “to break up the rehab in Leinster a little bit,” but that will depend on how he progresses.

An Indianapolis Colts fan, he’d relish the prospect. The IRFU’s head of athletic performance and science Nick Winkleman comes from that background while the Atlanta Falcons Alex Mack was in with Leinster for a week as an observer. Leavy said: “It’s still on the cards, we’ll wait and see.”

Leavy argues that the mental anguish of missing out on a World Cup was more debilitating initially than the physical pain.

“The physical side, the pain’s nothing. All the chat’s about the World Cup and that’s pretty hard to deal with sometimes.

“Just thinking about the build up to the Italy game, I flicked it on and heard the pundits talking about it, and I had to turn it off. I was like ‘I can’t watch this’. I came back down and caught the end of the first half and it was fine from there.

The support of family, friends, coaches, teammates and former players has eased that ache. Patience will be a virtue he’ll need in abundance.

“If I rush back from this and re-injure or I come back early and it’s not right, it could be career changing so this is something I need to take my time with. If you are looking at the grand scheme of things and it’s a 12 month injury, if it takes 13 months you’re in that far anyway so what’s another month going to matter.”