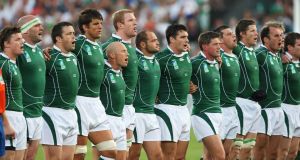 Just three of the players that lined up for Ireland against Namibia in Bordeaux at the World Cup 10 years ago are still playing. Photograph: Alex Livesey/Getty Images

Only teetotallers survive this long. That makes Donncha O’Callaghan and Peter Stringer the last of the Mohicans (those who straddled the amateur to professional frontier).

“I am a non-drinking Irishman and I think that has helped me,” said O’Callaghan, the Worcester captain, after signing a contract extension that keeps him on the treadmill for at least one more season.

Granted, Rory Best and Andrew Trimble are playing as well as ever while Stringer’s 40-year-old whip-snapping service could well be seen around Premiership grounds in 2018 but, otherwise, Eddie O’Sullivan’s 2007 untouchables have moved on.

A where-are-they-now from the 2007 class, upon whom O’Sullivan stacked all his chips, does not require much rummaging. Besides an injured Paul O’Connell, the Ireland team for their Six Nations finale in Rome was the same that started the World Cup opener against Namibia: Girvan Dempsey; Shane Horgan, Brian O’Driscoll, Gordon D’Arcy, Denis Hickie; Ronan O’Gara, Stringer; Marcus Horan, Best, John Hayes; O’Callaghan, Paul O’Connell; Simon Easterby, David Wallace, Denis Leamy.

Geordan Murphy or Trimble covered the outside backs while using Paddy Wallace and Eoin Reddan (until the Georgia meltdown) may as well have come with an “only break glass in emergency” warning. Same goes for Simon Best in the rare event of an injured Shannon prop. That meant Jerry Flannery and Rory Best were the only clear rotation.

Very different times. This serious gathering of talent will forever remain underachievers, but so much has changed in the intervening decade. So much has been learned as so many of them remain key influencers.

Taking it from the top: Dempsey just signed an extension as Leinster backs coach and will expand his education, under Joe Schmidt, on the Ireland tour of Japan this summer. Horgan, a lawyer and managing director of Teneo Sports, has locked down the holy trinity of media slots: Television for Sky Sports, a Second Captains podcast regular and columnist with the Sunday Times. O’Driscoll doesn’t need a column – he has a website – and keeps the visuals (BT Sport, ITV) balanced nicely with audio on Off The Ball. D’Arcy, who entered the business world long before retirement, offers an alternative perspective on the game every Wednesday in The Irish Times along with co-commentary for ITV. Hickie retains his aloof public persona but can be heard on BBC Five Live during the Six Nations.

O’Gara currently provides the definition of smooth transition from player to everything else. The Racing 92 assistant coach was an RTÉ pundit, until they lost the rights to Six Nations coverage, he signed up with Sportsjoe of late and still pens an Examiner column. O’Gara is another going on tour with Schmidt this summer, in New Jersey, while his social media footprint remains heavy due to regular appearances on Dan Carter’s Instagram.

Horan works for Rugby Players Ireland, asks the questions for TG4’s Guinness Pro12 coverage and was, until recently, the Shannon RFC coach. Best, the groundbreaking Ireland captain, has a while to go yet but this week Rassie Erasmus explained Flannery’s expanded role in the Munster set-up: “Jerry took on the lineouts and scrummaging and forward play overall.” Pieter De Villiers – the former France tighthead is drill sergeant for the Springbok scrum – has been mentoring the publican, who has also become the go-to-voice for mid-match TV comment.

Even John Hayes, a farmer, recently appeared on TV3’s The Clubhouse and graciously spoke to this paper for an oral history marking the 10th anniversary of England in Croke Park.

It already looks as if O’Connell can spend the rest of his days on the BBC educating the rest of us, he’s a brand ambassador for a supermarket chain and spends a few days a week at the Munster academy, coaching the development side and under-19s.

Easterby is the Ireland forwards coach while Wallace is employed by a bank and does some media work. Leamy – forced to retire at 30 with a new hip fitted – returned to the family beef farm but an old Rockwell College friend offered him “something to do in the winter evenings, to get me out of the house”. Leamy just guided Clonmel RFC to a third successive Munster Junior League Division 1 title. He was also part of the Tipperary hurling backroom team (mental preparation) when they captured Liam MacCarthy last year.

Of the splinter gatherers, Murphy has survived three coaching heaves at Leicester Tigers, Reddan turned down a last Leinster contract to become a business analyst with an aircraft-leasing company while Alan Quinlan’s fully stocked media portfolio includes Newstalk and the Irish Independent.

Of course, the genuine labelling of a golden era in Irish rugby only came with the Grand Slam in 2009 when the above group were infused with Stephen Ferris, Jamie Heaslip, Rob Kearney, Luke Fitzgerald, Tomás O’Leary and Tommy Bowe. All capped by O’Sullivan, only Ferris made the ill-fated 2007 World Cup squad.

As the history of Irish rugby keeps showing us, injury or a disastrous beating tends to unlock the selection door. Prime examples would be Warren Gatland’s dice roll in 2000 when Easterby, Hayes, O’Gara, Stringer and Horgan got capped in the 44-22 era-launching destruction of Scotland. Or Johnny Sexton’s arrival for a hobbled Felipe Contepomi 25 minutes into the guard-changing defeat of Munster in Croke Park in 2009.

That trend continues into this season with Joey Carbery only cut loose by Kearney’s knee/bicep surgery and Garry Ringrose given a clear flight path by Jared Payne’s lacerated kidney. Same goes for flag planting by Dan Leavy and Jack Conan when Seán O’Brien and Heaslip were crocked.

Old habits die hard. Rory O’Loughlin and Adam Byrne had to suck up the selections of Fergus McFadden, understandably, and Zane Kirchner, less so, against Clermont.

Ideally, Leinster’s narrow defeat to Clermont and Munster buckling under the enormous Saracens strain will herald a bright new era for Irish rugby.

“At the end of last season when we lost Luke Fitzgerald to injury and Ben Te’o left I thought we were going to be a bit thin on the ground with backs,” said Sexton this week. “All of a sudden you give these guys a chance and they thrive. Garry has been immense. Robbie [Henshaw] coming in from Connacht, you forget that he is only 23 because he has done so much already in the game. Joey has obviously been brilliant this season as well, wherever he has played.

“We badly needed them to come through.

“With Stuart [Lancaster] signing on for a couple of years and Leo [Cullen] being in charge, we are going to have some continuity now and all these players have signed up for two or three years at least.

“So now we can build. We have a couple of really exciting signings coming in as well [Scott Fardy and James Lowe]. Things are looking good for the future. But it’s key we win a trophy to show for our efforts this season. I think we got what we deserved last year by winning nothing.

“Hopefully we get what we deserve this year by coming away with something.”

The first fully professional generation of Irish rugby players – those who saw themselves this way the moment they laced up boots; inspired by O’Sullivan’s side – are now among us.

“All these guys coming through are some of the most professional,” said Sexton. “They older guys are sometimes learning a few things from them.”

Allied by specialist foreign coaching, these young men are shifting Irish rugby away from over-dependence on blue-chip players.

“I think Sexton is playing even flatter to the line than he had been when he first came back from France,” explained Horgan. “He is playing with more ambition. I think he rates those guys outside him maybe more highly than . . . I think it was almost too much on Johnny. He had to be the fulcrum for almost everything but the quality that has come in is giving an opportunity for others to come in after them.”

Maybe James Ryan and others from the 2016 Ireland under-20s will burst through next season.

Nobody foresaw – certainly not publicly – the dramatic turnaround in Leinster’s and Munster’s fortunes before the arrivals of Lancaster and Erasmus.

“I think both teams fundamental skills have been raised quite a bit,” said Horgan at AIG’s Ultimate All Blacks Experience competition launch. “The next phase, for Munster, is developing a bit of sophistication. The Munster DNA that exists throughout the club has been tapped into. The next step is to develop the real ambition that those great Munster teams had to throw the ball hard wide.

“I think, for Munster, the previous generation hung around the necks of this team last year. An element of it is the tail end of that generation just dropping away and people feeling more comfortable in their own skin by taking an ownership of the team.”

Leinster avoided a similar malaise as Sexton, O’Brien, Heaslip, Kearney and Cian Healy kept some form of continuity after the 2009-2012 silver rush. But, in simplistic terms, did these young squads need to fail last weekend to learn how to capture a European title?

“I don’t think it is just about losing these big games,” said Horgan, “because you can have a freak year, and you harness that, like Connacht did last year. They didn’t need to lose four semi-finals.

“I think there are milestones along the way. Winning away in France is one. Having impeccable home form, making it a place people hate to go. Winning a cup is important as well. It is very difficult to win a European cup if you haven’t won some domestic honours as well.”

The Pro12 final is at the Aviva Stadium on May 27th. Probably not a night for teetotallers.