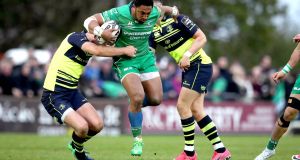 Bundee Aki in action during the Guinness Pro 12 game against Leinster at the Sportsground. Photograph: Ryan Byrne/Inpho

Connacht’s hopes of claiming a place in next year’s Champions Cup have been dealt a blow after Bundee Aki was hit with a three-match suspension for misconduct in the recent Guinness Pro 12 game against Leinster.

A complaint was made against the centre by the Pro 12 disciplinary officer for “behaviour to and remarks directed toward” match referee Ian Davies during and immediately after Connacht’s league game against Leinster.

Aki admitted the misconduct charge when he faced a disciplinary panel via video link on Thursday.

He cannot play again until May 22nd, ruling him out of Connacht’s Pro 12 appointments with the Scarlets and Munster, plus a Champions Cup qualification playoff fixture.

A statement released by the Pro 12 read: “The complaint referred to Mr Aki’s behaviour to and remarks directed toward referee Ian Davies during and immediately after the Round 20 fixture between Connacht Rugby and Leinster Rugby.

“Those actions were deemed to constitute misconduct under the tournament’s disciplinary rules, in particular pursuant to the clauses set out in Section 3.

“Mr Aki admitted to the charge of misconduct, and the panel agreed upon a sanction of a three-match suspension.”