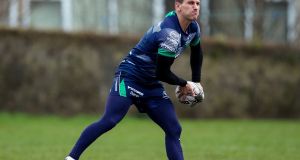 Marnitz Boshoff is back at outhalf for Connacht on Saturday night. Photograph: Inpho

Shame about this week’s disciplinary hearing. If Bundee Aki had not potentially derailed Connacht’s entire season - having earned a three match ban for abusing referee Ian Davies (who repeatedly warned both Aki and captain John Muldoon to put a lid on it) - then Lam’s charges would be far better positioned to retain their Champions Cup slot.

The non-competitive nature of the Pro 12 mid-table (see Edinburgh’s miserable resistance) means Connacht have already reached these European play-offs but they desperately need their talisman for the trip to France or England to face the club that finishes seventh in the Top 14 (currently Lyon) or Premiership (Harlequins).

Aki won’t be there. All because he couldn’t stop mouthing off.

“With Champions Cup being our main focus, the next two games present a great opportunity to prepare for the qualification playoffs in May,”said Lam before he leaves for relegated Bristol. “It allows us to give guys coming back from long-term injuries a chance to perform against a quality Scarlets side.”

At least their Springbok outhalf, Marnitz Boshoff, and Leinster exile, Cian Kelleher, are finally together in a backline that doesn’t have the same bite without Aki.

With the Connacht players still unsure whether new coach Kieran Keane will land in time for preseason, we shall see if they have checked out already.

Scarlets need to cement their top four position - they lie third and that means Munster in Limerick - so they should blow them away with Lions centre Jonathan Davies expected to show why he can still keep the starting Ireland 13 out of a Lions squad.

They have two more Lions in Liam Williams and Ken Owens while former Leinster lock Tadhg Beirne has impressed all season in a heavyweight Llanelli pack.

1 ‘This is sick’ - seventh-tier Swedish club cancels friendly after betting mayhem
2 Gerry Thornley: Changes to tackle laws could transform rugby by time of next World Cup
3 Sky Sports customers set to save on bills until Premier League returns
4 Jack Grealish needs to show that his remorse is real this time
5 World Rugby aiming to outline range of options by end of April
Real news has value SUBSCRIBE

World Rugby aiming to outline range of options by end of April 19:03
Impact of Covid-19 fails to derail pragmatic Stenson 18:38
Games postponement signals growing power shift from IOC to athletes 17:52
Tough for game to resume this year admits Tennis Australia chief 17:38
Substantial increase in out of competition drug tests on racehorses 17:22
Here is your handy guide to sport on television this week