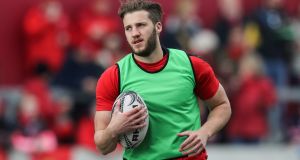 Potentially, here follows a case study: How to reverse a poor campaign with one month of winning rugby.

All or nothing, almost. A slight chance remains that one or the other will sneak into the semi-finals by Ulster downing Leinster or Ospreys catching the Scarlets flush next weekend, while the other falters, but delivering this afternoon means the victor deserves to be journeying to Dublin or Limerick.

No Alun Wyn Jones for Ospreys so Ulster should not be dominated out of touch. That bodes well for Rory Best’s throwing as the Lions microscope is now operational.

It’s a dangerous ploy to be backing Ulster at any point this season but they finally look to have their best backline (sorry, Tommy Bowe) in place with Les Kiss dropping Stuart Olding so Stuart McCloskey can pound over the gainline.

Charles Piutau has looked a little jaded of late but that must change now, unless the All Black shape shifter is unfit. If Piutau is primed then Ulster can come out swinging haymakers.

Even Ospreys coach Steve Tandy sounds like a corner man for Joshua versus Klitschko: “They’ll believe they can win and they’ll be looking to knock us out. We’ve got to prepare for that, we’ve got to not just match them from the first whistle, we’ve got to be prepared to fight for everything, right to the end. They won’t come here and just allow us to have it our own way.”

It feels like a season defining contest for these underwhelming teams, because it is. Ulster on points with Paddy Jackson to land more blows than Dan Biggar.