Munster and Leinster could meet four times before season’s end 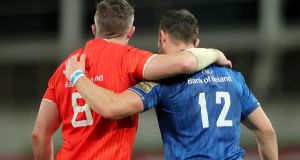 Munster’s Peter O’Mahony and Robbie Henshaw after their clash in September at the Aviva Stadium. Photograph: James Crombie/Inpho

The re-arranged game between Munster and Leinster on Saturday week in Thomond Park could conceivably be the first of three or even four meetings this season between the two old rivals.

As it is this is their only scheduled clash in the reformatted 2020-21 Guinness Pro14 although were the Rainbow Cup involving the four South African sides to be cancelled in time, the Pro14 would revert to an expanded format, which would incorporate the customary return fixture in Dublin.

As it is, Leinster and Munster are on course to meet in the final were Leinster to overhaul their five-point leeway behind Ulster in Conference A. The upcoming rescheduled match is one of Leinster’s two games in hand over Ulster.

Most intriguingly of all though, Leinster and Munster could be on course to meet in the quarter-finals of the Heineken Champions Cup. Following the temporary suspension of the European tournaments over the next two weekends, the various stakeholders and organisers are more inclined to have a knockout round of 16 and then one-off quarter-finals than the two-legged, home and away quarter-finals originally scheduled over the first two weekends in April.

This would mean the top eight in each pool progressing to the round of 16, but as well as matching off teams from opposite pools, the organisers are considering the option of keeping the ties to teams from the same pool.

This would have one major advantage which would be in keeping with the principle of not having teams playing opposition from the same league. Were the round of 16 to pit teams from Pools A against those in Pools B, ie 1 v 8, 2 v 7 and so on, it would result in four match-ups between sides from the same league.

Were the round of 16 to maintain the split between Pools A and B, there would be no ties between teams from the same leagues. Furthermore, this would be a fairer means of progressing to a round of 16 and also ensure an altogether more attractive list of matches.

In this scenario, Leinster will host Sale Sharks, a big, physical, combative South African-infused side who have risen to fourth in the Premiership in the last fortnight following back-to-back wins, while Munster’s reward for beating Clermont away would be a home tie against the same French opponents.

Other mouth-watering ties would see Racing host the holders Exeter in a repeat of last season’s final, held in October, which Exeter won 31-27 in Bristol, and Toulouse v Bristol Bears in a meeting of the current leaders of the Top 14 and the Premiership.

The full quarter-final line-up, with the higher-ranked teams having home advantage, could read: Leinster or Sale v Munster or Clermont, Wasps or Toulon v Toulouse or Bristol, Lyon or Gloucester v La Rochelle or Scarlets and Racing or Exeter v Bordeaux-Begles or Edinburgh.

As for Ulster and Connacht, they are likely to have the top two seedings from the eight sides in the Heineken Champions Cup who will be re-routed into the European Challenge Cup, where they will meet teams currently ranked in the top eight in that tournament. In which case, Ulster would meet Newcastle and Connacht would face Benetton.

Of course, Leinster and Munster already played each other twice since late August, the former winning the first game after the resumption and again the delayed 2019-20 Pro14 semi-finals. Accordingly, they could thus meet six times in less than 10 months, which would serve to sharpen the rivalry no end.

Apparently Leinster were keener on renewing the rivalry this coming Saturday but Munster were more inclined to host the rescheduled game on Saturday week. It helpfully fills the void created by the temporary suspension of the Champions Cup over the next two weekends, coming as it does a fortnight since the sides beat Ulster and Connacht respectively and 15 days before Ireland meet Wales in the Principality Stadium on Sunday, February 7th, in their opening game of the 2021 Guinness Six Nations.

A squad of about 35 for Ireland’s first two matches, France are due to visit the Aviva Stadium on St Valentine’s Day, will be named a day or two after this re-arranged Munster-Leinster game.