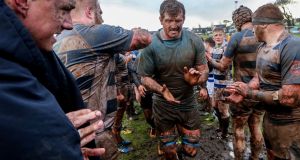 Galwegians’ Marty Cummins after a game against Dungannon in Febryary 2020. Photograph: James Crombie/Inpho

The Energia All-Ireland League has been in cold storage since last March. Except for a few regional senior games last autumn, no rugby of any kind under provincial level has been played since then. Nor is there a sign of a return any time soon.

There is also a feeling within the club game that the AIL will probably not return until August/September, with the entire 2020-21 season being written off.

The former Connacht flanker Paul Neville, whose sister Joy is making strides as a referee, is chairman of football in his old club Garryowen and believes it may be possible to start something up again in April, albeit that might be a minimum requirement of four weeks’ “pre-season”.

“But I’ve no doubt that the AIL will not be played this season.”

Be that as it may, the IRFU’s Rugby Development Director Colin McEntee is not giving up hope of the club game returning in some shape before then.

Speaking after a virtual meeting between the four provinces and the rugby committee on Thursday, McEntee said: “It’s a crystal ball phase again unfortunately so I think we’ll come out with a more definitive line in maybe two or three weeks, but the All-Ireland League is going to be a challenge.”

They are looking at various abbreviated options, be it anything from a five to a nine-round competition.

“The only certainty I’ll tell you is that in the club game we’re not packing in the season. If it’s not the All-Ireland League or the Energia Community Series, we’ll come up with some form of competition and if it has to be provincial or whatever, it will be.”

It could, he said, be five, seven, 10-a-side, restricted or non-contact, and then a mix of competitive or social rugby: “and have a barbecue and a few pints if allowed.”

A further source of angst for many clubs is that GAA club competitions got up and running before rugby last summer.

“This is because they got back when we were doing our pre-season last July,” says McEntee. “They got finals played off when we are at the start of the Energia (Community Series) and then phase two started then and everyone was shut down.”

All the more reason therefore that, when allowed, rugby breaks with tradition and does something, anything to at the very least, as McEntee puts it, “get the lights back on in the club. It’s absolutely critical.”

There are 50 men’s senior clubs, another 10 separate women’s clubs and 217 clubs all told on the island of Ireland. In total, it is estimated that they lost a cumulative €11 million last season after the pandemic struck.

The IRFU’s initial hardship fund of €500,000 was a pittance which required near bankruptcy to be released, but their allocation of €4million of the €18million emergency funding it received from Government was a godsend, ranging from €3,000 to €60,000.

“Every penny of that went out,” says McEntee.

Akin to the other clubs contacted, Galwegians would have put out up to 21 teams between adults, under-20s, youths, underage and womens sides, with a membership in excess of 400, obliging them to supplement their three pitches at Crowley Park elsewhere.

This contributed to them receiving €57,000 from the Government fund. “We would have gone broke otherwise,” says Frank Kineen, the Galwegians club chairman. “So I can’t give out about the Union in this case.”

Membership fees for the 2020-21 season may have to come into effect for next season. Similarly they put their sponsorships back with LK Shields, the Connacht Hotel and O’Connells Bar by a year while against all of this costs have been significantly reduced.

“The place looks well,” says Kineen, “but the cow house always looks well if there’s no cows in it.”

“Our biggest issue is that the club is dead,” says Brendan Smith, honorary secretary of Clontarf. “The last time we didn’t play rugby for a season in Castle Avenue was back in the first World War. The whole idea of parish is very hard to keep going when you don’t have any matches.”

The club has an internal kitchen which meant they could open its doors for three weeks in December. Contributions from members and club draws have helped. The Government’s Covid supplement has allowed clubs to keep on part-time and full-time bar, administration and coaching staff. There remain ongoing costs, such as insurance “which hasn’t gone down at all” notes Smith, and to some extent ground upkeep.

Clubs have also conducted fundraisers, albeit annual dinners and golf classics have mostly fallen by the wayside.

The IRFU/Government funding only applied to clubs south of the border and Banbridge missed out on a grant from the UK government.

Even so, the club retained their full-time and part-time staff through the furlough scheme, and helped by more savvy local GAA clubs, they’ve applied for a grant from SportNI.

“But we were supposed to have an Armed Forces Day and a day celebrating Rory Best,” says Eadie which amounted to a loss of maybe €170,000. Like the others, Banbridge fielded six senior teams, and underage sides all the way down to 200 playing mini rugby, which could lead to almost 450 players playing on a good week.

Sponsors and members have remained on board but like all clubs, Banbridge know these monies will now effectively apply to next season, thus reducing income in the immediate future.

“We will survive because we cut back on our outgoings,” says Eadie.

In the pre-pandemic days there were 194,000 registered players in Ireland, of which the schools’ game was the biggest bulk supplier, with 20,000 mini rugby players and 20,000 adult. Conceivably, by next August or September, the vast majority won’t have played in almost a year and a half and the fear is how many of those will return, not to mention coaches, volunteers and referees.

“Guys have had time away from the game and might wonder ‘I’m 28, I could have played for another couple of years, but why bother?’ I think the numbers will dwindle.”

He also worries there will continue to be more of a separation between the provincial and club games due to Covid protocols. “I think it’s just easier for them (the provinces) to stay away from the club rather than pretending they want to engage with the club. If they do, they’re missing a massive element of a very good base for guys to play in Division 1A.”

Neville also cites the example of Conor Murray, for whom Garryowen was an integral part of his early career path.

“Conor went back to playing with Garryowen and a year later he was a full international.”

“The biggest challenge every club face is keeping young people involved in rugby,” says Dineen, “and that applies to every part of the country. The GAA got some club county championships and their All-Irelands done and that kept the fire lit until December.”

Akin to the other clubs contacted, Galwegians would have put out up to 21 teams between adults, under-20s, youths, under-age and womens sides. Having them return will, he says, require huge leg work by Andrew Browne and the other coaches.

For his part Smith worries in particular that the year-plus break at mini rugby level may result in many of their mini players not returning, but his biggest concern is those adult players below the first team.

“It’s the junior players, as in from J1 down, playing in their late 20s on. Those guys will now have had at least a year away from the game and they may not all come back.”

“There’s a massive fear out there,” admits McEntee. “That’s why we have to offer something, and it doesn’t have to be the same as it always has, be it in format choice or competition choice.

“Hopefully a lot of players will think absence makes the heart grow fonder. If we can come back with programmes and competitions that are a little more exciting, if we have better connections, improving players, our coaches are connected, our refereeing is better.

“A lot of on online work is going on at the moment, we will have to market the game. The amateur game is very different from the professional game, especially at playing level, and you see what we’re trying to do with safe rugby, with Irish studies, preventing injuries, we’re very proactive.”

“Long-term this could be really good for us,” says McEntee, “because we might have an opportunity to look at everything that has been done in the past and say ‘right, what does the future look like?’ We will engage with the clubs again with real positive discussions about the AIL.”

Somehow, all concerned have to ensure all the clubs retain senior status, an all-Irish element and a pathway to 1A, while making the top flight more relevant to the pro game.

Debunking one myth, Davies says of Banbridge: “One hundred per cent we want to play in an All-Ireland League.”

Kineen says on behalf of Galwegians and the Connacht clubs: “We want visits to Dublin, Limerick and elsewhere, and return games. If we just played regionally we’d get tired of looking at each other.”

But as Neville also warns: “Something has to change because it’s not sustainable.”

McEntee told The Irish Times last May that his ‘utopia’ was all 217 clubs staying in existence. “It’s still our utopia. Having the clubs and schools still active is the foundation of everything, not least the pro game. That is where the next generation will come from, the schools game and the club game. They get their flying wings there. We can’t let it slip.”

“Everyone is a stakeholder here.”