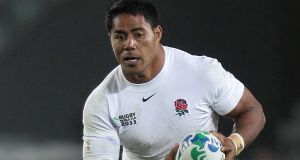 Captain Dylan Hartley has tipped Manu Tuilagi and Denny Solomona to force their way back into the England squad despite being sent home early from a pre-season training camp.

Skipper Hartley admitted Leicester centre Tuilagi and Sale wing Solomona “let us down” in breaking England’s code of conduct, a breach understood to have been alcohol related.

The duo’s Test careers are now in limbo, but hooker Hartley believes both stars can still force a lifeline with England.

“We’re a team and as a team we set our own standards off the field,” Hartley said. “And ultimately those guys let us down in that area.

“We’re a team and we’ve got a code of conduct that we adhere to. The team dealt with it and I’m sure those players will have their heads down and be working hard now to get back in the picture.

“Because they are good players, and both of them are worth having in your side.”

Hartley praised no-nonsense boss Jones’ decision to remove Tuilagi and Solomona from England’s camp, but insisted the duo’s reaction will define their futures — not this disciplinary lapse.

Leicester star Tuilagi is yet to prove his long-term match fitness after two injury-ravaged seasons, but Jones had previously admitted what a bonus the potent Samoa-born centre’s return could be for his England side.

“It’s unfortunate for them, but you make decisions, you’ve got to live with those decisions, and that’s that,” said Hartley.

“But like I said, they are two valuable guys, so I know the type of characters they are, they’ll be out there working hard and will be wanting a big start to the season just like the rest of us.”

Hartley’s 60 weeks of suspensions in a turbulent career leave him no stranger to controversy, but the 31-year-old has thrived since being named England captain by Jones.

The 86-cap front-rower has led England to consecutive Six Nations crowns as Jones’ men have won 20 of the 21 Test matches in the Australian coach’s tenure.

This term Hartley will combine England duties with the captaincy at Northampton Saints.

Hartley insisted he thrives on the extra responsibility and cannot wait to get to work, to continue to earn the right to lead both club and country.

Hailing Jones for mentoring sessions that have shaped his Test captaincy, Hartley insisted leadership can be learned.

“Captaincy is a skill that needs to be practised and that’s why I’m quite comfortable with leading here again now,” said Hartley of assuming the Saints armband.

“I’ve done it long enough now to be able to manage both roles, if I get the chance. Neither captaincy is guaranteed: not at Saints or England.

“If I’m not playing well and the other hookers are, then I won’t play. And on the international front, Eddie’s never said ‘you are the captain’. He’s always told me ‘play well, get in the team, and we’ll go from there’.

“So that’s my focus. You’ve got to earn it every time. Leadership is definitely something that can be practised.

“You can make conscious decisions about how you act, conduct yourself and apply yourself.

“And I think there’s a lot of guys have that within them, but it needs bringing out. Eddie is very good at that.”

Targeting England’s 2019 World Cup squad already, Hartley continued: “Eddie’s always expecting more. Just the mentoring side of it, he’s been really good for me, trying to develop me as a leader.

“Giving me positive feedback and also telling me when I’m not doing things well.

“And he’s always sending me snippets of things to read, podcasts. He’s really investing in me, and so I want to repay that and really deliver on the field. He’s been good for me.

“Eddie has spoken very bluntly with me about the future.

“It would be a dream just to be a part of that team going to the next World Cup. But he’s just very bluntly said to me the opportunity is there to do it, but he can’t pick me if I’m not playing well.

“He’s made it very clear to me as well that if I’m not doing it there are other people that can do the job.

“So it’s encouraging to know that I have that support, but I have to meet that expectation and deliver, definitely.”