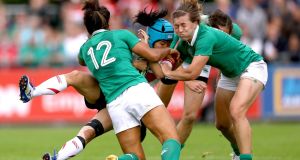 Take the glossy finish to this largely inept performance. Paula Fitzpatrick’s second try was the same as almost every Irish score in the recent times. After 30-plus pick and goes, having abandoned any semblance of a plan to drag the shattered Japanese into the Belfield muck, Nora Stapleton’s conversion bounced off the post and over.

Still, on this form Ireland can forget about playing a semi-final in Kingspan stadium come Tuesday week. England and New Zealand have been clinical, the Canadian sprinters are racking up tries, while Ireland have needed an hour against both Australia and Japan to find any semblance of composure.

The coaches and senior players – those who are able to continue after two punishing outings – have a mammoth challenge to overcome France next Thursday.

Ireland were abysmal in the opening 40 minutes, not much better in the third quarter before their superior fitness and physicality told.

Coyne fumbled two routine aerials balls at key moments when an exhausted looking Irish pack needed a safe pair of hands behind them.

But the pack Tierney fielded needs closer scrutiny. The one paragraph IRFU injury update on Thursday reported just “bumps and bruises” arising from the hugely physical 19-17 win over Australia. Maz Reilly – a crucial figure in Ireland’s set piece play – and Jenny Murphy were so clearly hurt against the punishing Wallaroos.

Neither player was included in this matchday squad. The first three lineouts gifted Japan possession. Not a single green jersey was launched in the air to catch Ciara O’Connor’s first throw.

As Ailis Egan instantly replaced the inexperienced Ciara Cooney, the Irish huddle was reminded that a new rule meant no conversion was needed off a penalty try.

Back to halfway they went, 7-0 behind and looking shell shocked.

Skipper Claire Molloy was having a phenomenal game at the breakdown. Others were defending bravely but, besides the leader, nobody deserved a positive mention from from that first half display.

Coyne was lucky to stay on the pitch for a ferocious high tackle on Eriko Hirano after scrumhalf Nicole Cronin let the winger cut through midfield. In fairness, the Irish had several inches on most Japan players. Sophie Spence suffered a similar fate and Katie Fitzhenry was eventually sin binned for the same offence.

By then Tierney had replaced his entire frontrow. The Ashleigh Baxter experiment – a winger moved to flanker – was also abandoned early in the second half when Fitzpatrick came in while Louise Galvin was given her first cap as Coyne was pulled.

By then Ireland were facing a 14-point deficit. The second Japan try was pure pressure. Ali Miller, the Laois heroine, almost cut out a two-woman overlap but Mayu Shimizu wriggled free.

Without a player to put any distance on the ball – Tierney has had three years to solve this glaring issue – the forwards and midfielders are expending ridiculous amounts of energy to force a path into Japanese territory.

Again, always the same it seems, Ireland had to gut this one out.

Miller came to the rescue. Her try in the 46th minute – a work of utter aggression – ignited the revival.

But handling errors heaped upon poor decision making are all but guaranteed to derail this World Cup dream. The huge French pack will not be bullied like Japan.

It took another 15 minutes before they returned to the Japanese 22.

Sene Naoupu, sensational in defence, was finally given a chance to run from deep but when a routine recycle went back to Stapleton the outhalf, not for the first time, knocked on.

The resolve of this squad must be limitless because they dusted themselves down and went again.

On 63 minutes an old favourite, the driving maul, meandered its way to the line. A smiling Fitzpatrick rose from the rubble.

Stapleton, as she did against Australia on Wednesday, held her nerve off the tee to level it at 14-all.

On the next foray up field, Stapleton yet again carried all the pressure on her small shoulders. A cleanly struck penalty made it 17-14 – 72 minutes of stress for a three-point lead.

The body count is a major concern now because they won’t cut out the mistakes. That’s part of their frustrating charm.

1 Ireland v Scotland: Doris’ day as Caelan set for first cap
2 Gary Lineker: ‘60 is just a number, 70 is the one to worry about’
3 Six Nations: Pundits, journalists and players have their say
4 Kobe Bryant obituary: A transcendent, if enigmatic, superstar
5 The Offload: Doris, Kelleher and Cooney to give Ireland a new look
Real news has value SUBSCRIBE