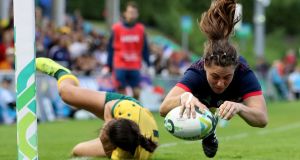 The contrast could not be more pronounced. France have been lightly skipping towards Thursday’s seminal Women’s World Cup pool decider against Ireland while the host nation have demonstrated a bloody-minded resilience to overcome ragged displays. The winner at the Belfield Bowl will progress to the semi-final.

The French dismissed Japan (72-14) and Australia (48-0) with imperious ease, the rugby vibrant, athletic and well structured whereas Ireland’s performance portfolio against the same opposition – they beat the Wallaroos 19-17 and Japan 24-14 – is a rather unloved body of work, pockmarked by basic errors and fractured game management.

Ireland’s imperfections though are nothing new and as last season’s Six Nations demonstrated when they won four of five matches including beatingFrance 13-10 at Donnybrook, the knack of prevailing in tight tussles is an important asset. One trait the team does not lack is character.

The relevance of that win almost six months ago must be parsed against current form but it should not be ignored. The composition of the French pack from that match is likely to be identical to the one that takes the field on Thursday.

Hooker and captain, Gaëlle Mignot was rested against Australia but she will return, so too centre Caroline Ladagnous – she scored France’s try in the Six Nations game between the countries – and possibly wing Camille Grassineau.

If that is the case then 12 of the French side from that Donnybrook game will start on Thursday. The only alterations will be at scrumhalf, where Yanna Rivoalen is now first choice, outhalf and fullback.

Similarly, Ireland could have the same pack from February but would be much stronger behind the scrum given that Ali Miller, Sene Naoupu and Hannah Tyrrell, to name three, did not play that day.

About 17,000 women play the game in France compared with 4,500 in Ireland but the countries share broad similarities in terms of structure with Sevens players being paid and the 15-a-side sibling an amateur caste.

An article in the French rugby newspaper Midi Olympique described the attitude of the French Rugby Federation (FFR) to women’s rugby as having a twin track approach, one of compensation for the employers of players but strictly amateur for the club game. The French Women’s Sevens team have operated on a semi-professional basis since 2014.

As secondrow Lénaïg Corson, who will face Ireland on Thursday, explained that after qualifying for the Rio Olympics the FFR increased the financial stipend. “All the [Sevens] players are getting the same thing this year: €2,000 net [per month].” She works an additional nine hours a week with GMF Assurances in Rennes.

She added: “It was the will of the former president [Pierre Camou] not to professionalise ourselves entirely so that we can keep a footing in the business world. Those not part of the Sevens set-up and that play XVs for the national side study or work.”

Corson’s secondrow partner, Audrey Forlani is a full-time shopkeeper in an agricultural co-operative in Tarn-et-Garonne. The club for which she plays, Blagnac, near Toulouse, is an hour down the road. She explained her daily regimen. “I do my work day and after [that] I go to training, three times a week, at 8pm, Tuesday, Wednesday and Friday.

“When I return home, it is well after 11pm. I get up the [following] morning at 7am and go to work.” As Samuel Cherouk, one of the two coaches of the France team lamented: “We will have to find solutions so that they train more and better.”

The FFR has been proactive in trying to remove some distractions financially and in terms of preparation especially for the Women’s Rugby World Cup. “When we leave for the French team, we do not need to take leave or leave without pay, it is taken care of by the federation,” explained tighthead prop Julie Duval, who works in a hardware store.

“And then, to prepare for the World Cup, they released us seven hours a week so we could do the training, rest and go and see the physio,” something the players appreciate. The IRFU is compensating the Irish players for loss of earnings during the 16-day tournament and has agreed to a €500,000 increase in funding for the women’s game.

The main discrepancy between the countries remains the playing numbers rather than funding or the work/life balance of the respective players but that has less relevance come Thursday night at the Belfield Bowl. The teams are well known to each other so it’s all in the game.

Prominent owners terminate contract as Gordon Elliott’s yard sponsor 09:45
Gianluigi Buffon at 43: why messing up is key and what makes him happy 09:39
Manchester City go 15 points clear; Gordon D’Arcy on what we can learn from Italy win 07:36
Gordon D’Arcy: Ireland merely picked through the carcass of Italian rugby 06:00
Brian O'Connor: Elliott revelations leave racing’s good name in state of disrepute 06:00
Crossword Get access to over 6,000 interactive crosswords