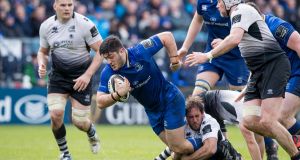 Leinster’s Vakh Abdaladze is tackled by Roberto Tenga of Zebre during the Guinness Pro 14 game at the RDS. Photograph: Morgan Treacy/Inpho 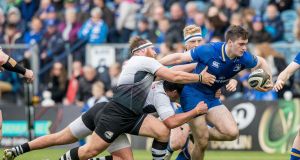 Leinster centre Conor O’Brien is tackled by Andrea Lovotti and Jacopo Sarto of Zebre during the Guinness Pro 14 game at the RDS. Photograph: Morgan Treacy/Inpho

Another pleasing day all-round for Leinster. This 13th win out of 13 home games in both competitions, complete with bonus point, cemented their place atop Conference B of the Guinness Pro 14 and constituted a significant step toward a home semi-final, which in turn could ease their load as they also seek to conquer Europe.

In doing so, they delved further into their unequalled reservoir of talent, with Gavin Mullin, the 21-year-old son of Brendan, making his debut off the bench and in so doing became Leinster’s 53rd player to be used this season.

There was also a full home debut for 20-year-old Mullingar centre Conor O’Brien, who has strength in abundance and showed some nice touches, while there was a try-scoring home debut for 22-year-old Georgian-born Academy prop Vakh Abdaladze. Barry Daly also caught the eye on a first outing at fullback, drawing gasps from the crowd when controlling a ball made slippery by heavy, if brief, showers on his thigh before catching it.

James Lowe’s enthusiasm and energy (infectious for both home team and crowd alike) knows no bounds, and as ever he was seemingly as fired up for this game as a week previously. His and Leinster’s opening and fifth try was fair reward for his efforts, and also constituted his eighth and ninth for the province in just 10 games.

The increasingly impressive Max Deegan also chipped in with a brace, thereby taking his tally to five in 15 games in his first season as a professional.

With Bryan Byrne again making a big impact, as pleasing as any aspect of this display for the Leinster think tank and a crowd of 10,000-plus was how a relatively callow home bench added to Leinster’s performance and further pressed home their superiority; Byrne crashing over for their seventh and last try.

With that, Leinster opened up an eight-point buffer atop Conference B, although that was reduced back to four when second-placed Scarlets secured an impressive 26-8 home win over Conference A leaders Glasgow at Parc y Scarlets. Thanks to Ulster’s bonus-point win away to Edinburgh on Friday night, it also left Leinster 10 points clear of the third-placed Scottish side.

Winning Conference B would ensure Leinster of a bye into the semi-finals, so avoiding a potential quarter-final trek to face the Toyota Cheetahs in Bloemfontein a week before the European Cup final, should they reach it, as well as a home semi-final a week after Bilbao.

It’s a barometer of the strain Michael Bradley’s squad are under that Zebre could not field any secondrow or backrow replacements on a re-jigged bench, which instead featured four props.

Despite that, they began well, recycling the ball efficiently through the phases inside the Leinster 22. The home side couldn’t establish a foothold, thanks in the main to Jamison Gibson-Park and O’Brien kicking out on the full either side of Dan Leavy knocking on at the base.

But from their first foothold, they scored, thank in the main to Lowe’s energy and desire. Gibson-Park fed the New Zealander on the blindside of a scrum on their own 10-metre line, and the winger’s perfectly weighted kick forced Italy’s star turn in the Six Nations, 21-year-old fullback Matteo Minozzi, to concede an attacking lineout.

When that was sacked, Lowe took a quick tap, and though held up just short, was back in position a couple of rucks later to take Ross Byrne’s pass and a tackle by Jacopo Sarto to score. Ross Byrne converted.

After Leinster mucked up their next attack, the afternoon’s first of the forecast heavy showers had many of those at the uncovered Simmonscourt Road end scurrying for the exits, either temporarily or permanently.

A couple of penalties and lineout mauls had the Italians on the front front, a well controlled drive of close-in targets and pick-and-jams ending with Valerio Bernabo seeking to scale the ruck American Football style, but Cian Healy was alert to that, before Deegan prevented Marcello Violi from grounding against the base of the post.

Somewhat surprisingly, and probably to Leinster’s relief, Zebre opted for a tap-over three-pointer by Carlo Canna, whereupon Daly countered through Zebre’s chasing line when stepping Giulio Bisengi. Good hands by Deegan and Lowe kept the move alive, before James Tracy took a hard line onto Tadhg Furlong’s deft pass and offloaded, spread-eagling the defence for Gibson-Park, Ross Byrne and Lowe to put Rory O’Loughlin over for the second try.

With that, the second shower all but emptied both uncovered stands at either end of the ground, and they were all invited into the covered stands.

Within about 27 seconds of the restart, Leinster struck again when Deegan – Conor Murray-like – came around the side of a Zebre ruck about 20 metres out, picked up the loose ball under Violi and had the legs and strength to run on and score.

Whereas Zebre opted conservatively for another three-pointer from close-range through Canna, Leinster soon turned one down in pursuit of a fourth try when Ross Byrne kicked to the corner, but Faialaga Afamasaga latched onto the ball to force a penalty.

But they were then forced to bring on a prop, Eduardo Bello, for their captain and lock George Biagi, and were pinged at the next scrum when they crumbled. Cometh the hour, Deegan tapped and O’Loughlin steamed onto Lowe’s floated pass, before Bryan Byrne moved the recycled ball on to Deegan, who powered through Minozzi’s tackle to score his second try.

Adam Byrne was denied a try from Ross Byrne’s cross kick by Mattia Bellini’s tackle just before the introduction of Mullin. Recourse to their somewhat callow bench only added to Leinster’s momentum and after Adam Byrne ran infield off Deegan’s clever sliding pass off the deck, Ross Byrne broke off the recycle and Lowe had the strength again to score off the outhalf’s deflected pass.

After Ross Byrne found a good penalty into the corner, Abdaladze rumbled over from close-range for his first Leinster try, and their sixth of the day, when helped by fellow replacement Ross Moloney latching on to him.

Bryan Byrne, now making up for a lost two years on the sidelines, crashed over their seventh. A satisfying day all round.