Frustrated O’Brien has eyes on semi-final against Scarlets 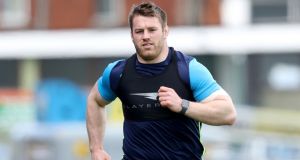 Leinster’s Sean O’Brien: “You can’t play with a dead shoulder....There’s no point in going around trying to carry it.” Photograph: Oisin Keniry/Inpho

Sean O’Brien hopes to have at least one Pro 14 league game under his belt before facing into a European Champions Cup semi-final against Scarlets in less than three weeks’ time.

The Ireland flanker won’t play this weekend against Italian side Zebre, but has targeted the following match when Leinster play Benetton Treviso in the RDS on April 14th.

O’Brien injured his shoulder against Scarlets during his comeback match from a hip injury, and missed Ireland’s Grand Slam win as well as Leinster’s win over twice European Champions Saracens last weekend in Aviva Stadium.

It has been a frustrating couple of months for the 31-year-old, who was given the captain’s armband for the match with Scarlets. His hip problem had cleared up, but he injured his shoulder and was forced out of the game.

Prior to that O’Brien had not lined out for Leinster since a Champions Cup match against Exeter last December.

“Yeah, it was frustrating,” he says. “Because I probably would have backed myself if I’d played 50 minutes against Scarlets to be involved [in the Grand Slam] if I’d played any way well at all.

“But I knew after 90 seconds of that game [Scarlets] that I was in trouble. That was that. I knew then that the following week wasn’t going to be realistic. So very frustrating, yeah.

“You can’t play with a dead shoulder. Yeah, it was dead. That’s the problem. There’s no point in going around trying to carry it. You wouldn’t get away with it. You’d only be making a fool of yourself and you wouldn’t be helping the team.”

Throughout there has been radio silence from Irish coach Joe Schmidt, which he understands is part of the ruthless side of professional sport. O’Brien watched Ireland beat England to win the Grand Slam in a local pub in Tullow, Co Carlow, with friends.

Perish the thought the “Tullow Tank” might get weepy about the colder side of rugby.

“No, I haven’t heard from Joe at all,” said the Lions and Ireland backrow. “Once you’re out you’re out. Every player knows that. The physios are in contact obviously and relaying stuff back to Joe. But that’s the way it’s always been, and that’s always been his style.

“You don’t pay much attention to it because when you’re fit you know that you could potentially be involved and when you’re not you know you’re out.”

He was not tempted to declare himself fit for the quarter-final against Saracens. O’Brien’s maturity, drawn from the experience of previous injuries, has informed him. It is a fool’s game to rush back into competitive matches.

Blessed with deep cover in the backrow, Leinster miss his leadership and energy, but coach Leo Cullen has quality cover even with Josh van der Flier injured. Scott Fady, Dan Leavy and Jordi Murphy started against Saracens, with Rhys Ruddock and Max Deegan coming on.

Unless O’Brien is fully able to play his naturally physical game, he will not be declaring his availability. But he is encouraged by progress.

“A few markers hit this week, so I should be available probably next week. Probably didn’t want to go out half-cocked so, yeah, I did everything I could to get back. So it probably made sense not to play.

“I didn’t want to go out there and not be able to perform to the level that was required at the weekend. As you saw it was a physical game. I wanted to be 100 per cent right going into that game because I’m no good to the team. There was no point in going out there [Saracens] if it wasn’t fully right.”

His main grievance has been similar to what Rob Kearney complained of when he hit a run of injuries. The Leinster fullback bemoaned his inability to string a series of matches together to play into some form.

Kearney’s renewal at 15 has coincided with an extended period during which his body has been healthy. O’Brien, like Kearney’s injured brother Dave, has not been able to do that.

A European Cup match, the knockout Pro 14 phase and a summer tour to Australia in which he wants to fully participate, are mid-term goals. O’Brien believes the tour could provide restoration of place, a vehicle to rise to Test level rugby again.

“I think I need those games. I need that level now to get used to it again, to get my body battle-hardened again.

“That’s why I want a few games. I don’t want to play a game and have a week off or anything like that. I want as much minutes as I can get to get a bit of consistency and flow.”

For Ireland an expectant 18 months are ahead. Already the flanker is on message.